PM says disciplining of cadets is 'not torture'

Excessive military punishment has come under heavy criticism in the wake of the mysterious death of a cadet while Prime Minister Prayut Chan-o-cha has defended military cadet training standards.

The National Human Rights Commission (NHRC) also says that harsh disciplining of cadets could constitute an act of torture if the draft anti-torture law comes into effect.

Speaking to reporters Thursday, Gen Prayut said Supreme Commander Thanchaiyan Srisuwan would meet for talks the family of Pakapong "Moei'' Tanyakan whose cadaver was later found to be missing organs including his brain. 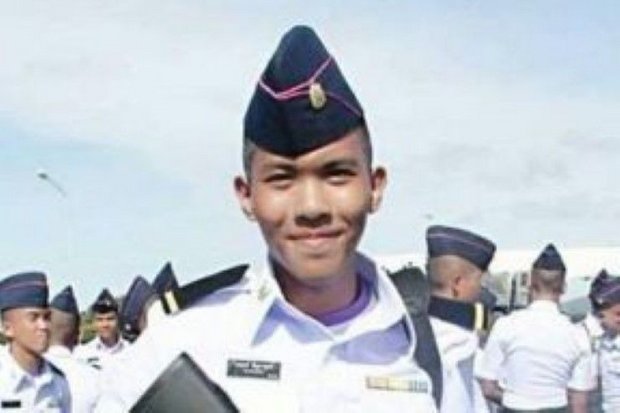 This is the last known photo of Cadet Pakapong Tanyakan, taken by a friend at the Armed Forces Academies Preparatory School at Nakhon Nayok. A major scandal is brewing over discipline, corporal punishment and deaths of young troops at military schools and bases. (Photo via Post Today)

Asked about public concern over military discipline for cadet training, he said the public should not be worried. "Don't worry. Nobody wants any losses or injuries," he said.

The prime minister also said he was disciplined when he studied at the Armed Forces Academies Preparatory School.

"What's wrong with it? I went through it all."

Maintaining discipline to train and hold military personnel to high standards of both conduct and performance is common at other foreign military institutes, Gen Prayut added.

Angkhana Neelapaijit, a National Human Rights Commission member, said disciplining military personnel and cadets could be deemed as an act of torture if the draft anti-torture and anti-disappearance law is introduced.

Once the legislation is enacted, it will criminalise all forms of physical and mental torture, Ms Angkhana said, adding that a system of excessive military discipline would violate the law.

"If the government wants to make human rights a national priority, it should revamp this military disciplinary system," she said.

Lt Gen Nathaphol Boon-ngam, spokesman for the Royal Thai Armed Forces Headquarters said Thursday that Gen Thanchaiyan had appointed ACM Chawarat Marungruang, deputy head of the joint chiefs of staff, to head an inquiry panel to look into the cause of the death of Pakapong.

The panel will examine in detail medical information relating to the cause of the cadet's death, and investigate allegations that Pakapong was excessively punished.

The military academy has strict regulations on disciplining cadets and anyone who violates the rules will be punished, Lt Gen Nathaphol said.

Pakapong's family collected his internal organs Thursday from army-owned Phramongkutklao Hospital and took them to the Central Institute of Forensic Science (CIFS) under the Justice Ministry for a further autopsy to determine the cause of his death.

The family secretly removed Pakapong's body during his funeral rites as they did not believe he died of cardiac arrest as claimed by Phramongkutklao Hospital, which conducted the initial autopsy after his death.

The family brought Pakapong's body for a second autopsy and found that his heart, brain, liver, lung and intestines were missing.

The hospital said later it removed the internal organs for further autopsy and returned them to the family Thursay to take to the CIFS which has stepped into conduct the fresh autopsy. 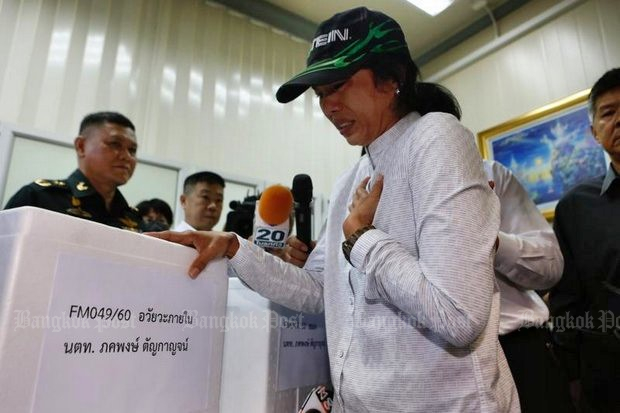 Mother Sukanya Tanyakan (above), father Pichet Tanyakan and other relatives collected the organs of the dead Cadet Pakapong Tanyakan, which the military had removed without informing his family. (Photo by Pattarapong Chatpattarasill)

Som Promros, the CIFS director, said pathologists at the CIFS will check DNA from the organs to see if they match the body of the dead cadet.

Mr Som said the CIFS has contacted doctors from three hospitals -- Siriraj Hospital, Chulalongkorn Hospital and Ramathibodi Hospital -- to work with the CIFS to determine the cause of death.

Mr Som said the autopsy will be completed in seven days.

According to Mr Som, the family's letter requesting the autopsy was sent to the CIFS on Oct 25 and it started on Nov 1.

Dr Panjai Woharndee, a CIFS official, said on Wednesday removing organs for a detailed examination without asking the family's permission is neither illegal nor unethical.

She said there are no standard rules on the matter, while noting that DNA testing can prove if the returned organs belonged to the cadet.

According to the family, the death certificate indicates their son died of acute heart failure but provided no details.

Their suspicions intensified after the CIFS team found some organs under the chest and abdomen and the brain had been removed.

On Tuesday, the Armed Forces Academies Preparatory School said the organs were taken out to conclusively determine the cause of the cadet's death.

Free state quarantine for Thais set to end on July 1

10m jabs to be given in July: CCSA