Prime Minister Prayut Chan-o-cha's first cabinet trip to the far South aimed at winning back local confidence in the government backfired when the government's actions were perceived as "unfriendly" to residents.

The two-day mobile cabinet visit to Songkhla's Muang district which ended Tuesday was the first time the full cabinet has met since the Prayut 5 reshuffle was announced last Friday. It was also the first time ever that Gen Prayut has led the cabinet to the South.

The cabinet trip to the lower South was significant in many ways as the country is now transitioning to democracy after more than three years under the military regime's rule. Gen Prayut has said previously the general election is "expected" in November of next year, although he has refused to set a date.

While residents in the South are known to have supported the government as well as the National Council for Peace and Order (NCPO) since the 2014 coup, rubber growers in the South have been hard hit by falling rubber prices, and feel increasingly dissatisfied with the government.

In light of this, the government needed to address their dissatisfaction and the visit to the South was important in that regard.

Tuesday's mobile cabinet meeting approved 14 infrastructure development projects worth more than 500 billion baht to be carried out between 2019 and 2023. The projects cover road networks, rail transport systems, ports and airports. 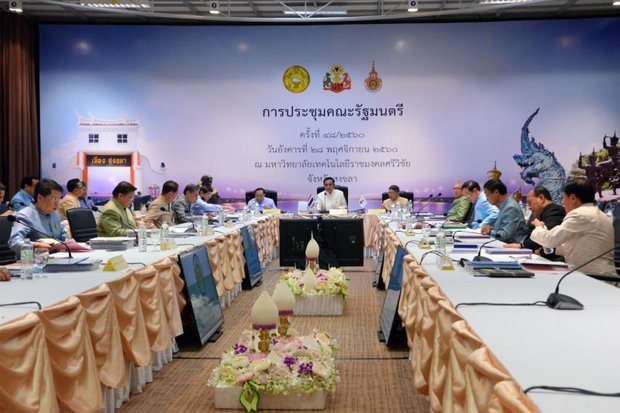 The actual cabinet meeting and aid programmes for the region (above) and attempts to 'press the flesh' at markets and farms (below) were not enough to overcome other incidents perceived as unfriendly by southerners. 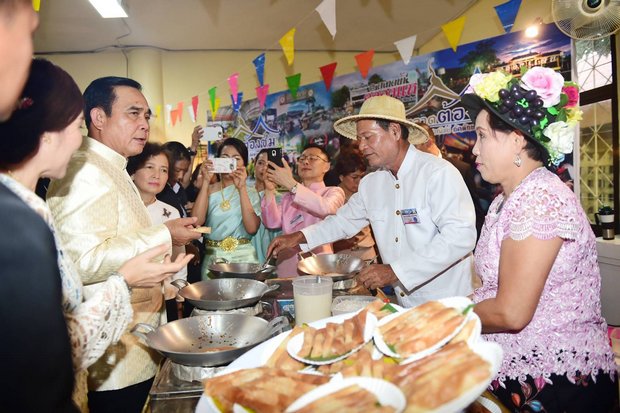 The government's best efforts to win the hearts of residents were overshadowed by a couple of incidents on Monday, which cast the administration in a negative light.

The first incident was a clash between anti-coal protesters in Songkhla and authorities. About 500 people joined a rally against a coal power plant project in Songkhla's Thepha district. Sixteen of them were arrested after they clashed with police, resulting in three injuries.

The protesters walked from Thepha district to submit a letter of protest to the prime minister in Muang district, but they were stopped on their way by police, which led to the clash.

Even as authorities insisted the protesters used sticks to attack them, the National Human Rights Commission (NHRC) said the protesters had the right to free speech under the constitution.

Police charged the 16 protesters Tuesday with obstructing traffic, resisting and harming authorities, and carrying weapons. They denied the charges.

Police took 15 of the protesters to the Songkhla Provincial Court to seek approval for a 12-day detention period. The court approved the request.

The protesters were unable to secure bail because they did not have the money to pay it. The bail demand came to 1,350,000 baht in total, or 90,000 baht each. They were later taken to Songkhla Central Prison. They will reapply for bail today.

The other incident involved Gen Prayut unleashing an outburst of vitriol at a fisherman during his visit in Pattana's Nong Chik district on Monday when Paranyu Charoen, a 34-year-old fisherman, asked the prime minister to change fishing regulations to increase the number of days that fisherman can put to sea.

Mr Paranyu said the 220 days a year in which fishermen can go fishing as stipulated by law is not enough and they could not make any profit during such a short period. "Don't yell at me. I'm listening to you," Gen Prayut was heard responding to the fisherman in a clip which went viral on social media.

In the wake of the incident, a Facebook page run by Gen Prayut's team of spokespeople posted a message, saying that the prime minister regretted the incident and apologised for his foul temper.

The incidents have drawn heavy criticism, even from government supporters who expressed their disappointment.

Thaworn Senneam, a former Democrat Party MP and a former member of the now-defunct People's Democratic Reform Committee who is known to have supported Gen Prayut, said this was not the first time Gen Prayut had vented his anger, and after he got a grip on himself he decided to apologise.

Whether this incident will have any political consequences remains to be seen, Mr Thaworn said.

Democrat Party spokesman Nat Bantadtan said the incident would not have happened if Gen Prayut had understood the problems of fishermen better. Losing his temper would only lead residents to believe they could no longer rely on the prime minister, Mr Nat said.

Addressing the clash between the protesters and police, Gen Prayut insisted that political gatherings of more than five people are illegal under NCPO orders and the law.

The government has been trying to show leniency in law enforcement, but the protesters still used force against the authorities, Gen Prayut said, rejecting accusations of human rights violations.

However, at a media briefing Tuesday, NHRC members Angkhana Neelapaijit and Tuenjai Deetes voiced concern over the clash. Ms Tuenjai said the demonstrators exercised their rights to free speech and peaceful assembly guaranteed by the constitution.

Chulalongkorn University political scientist Chaiyan Chaiyaporn said the government is trying to boost its popularity with the mobile cabinet meetings.

He cited Gen Prayut's remark: "Don't hate the military. You don't have to love me much, but I want you to love me a long time."

Mr Chiyan also cited a comment by another political science professor, Nidhi Eoseewong, who said the premier's public relations effort will not succeed. He said if the government wants people to back a role for the NCPO after the poll, the regime needs to abstain from being a political player.