Regime on alert but critics smell a rat

Police and an EOD team dig a 'massive' arms cache of 32 grenades and ammunition from a rice field near the Chachoengsao-Nakhon Nayok-Pathum Thani region northeast of Bangkok. (Post Today photos)

A huge arms cache discovered last week in Chachoengsao was intended for use by political elements to support a fresh round of unrest in Bangkok, deputy national police chief Srivara Ransibrahmanakul said Thursday.

However, key red-shirt figures have expressed suspicion about the timing of the discovery, saying it could be a government tactic to curb the bad publicity the regime has received during its mobile cabinet trip to the South.

Deputy national police chief Srivara Ransibrahmanakul said the weapons of war and ammunition discovered in a rice field in Bang Nam Prieo district are believed to be linked to bombings in Bangkok during the political unrest that preceded the 2014 coup. 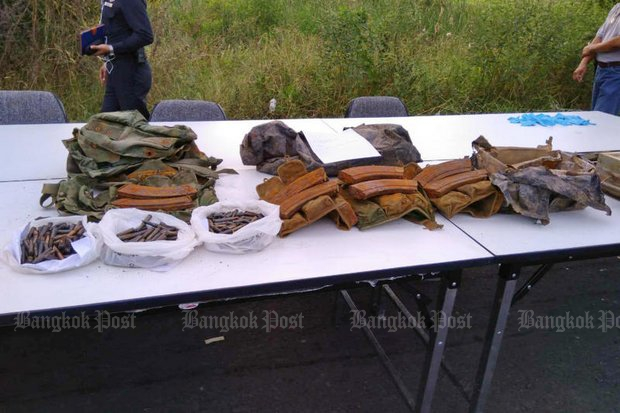 Critics say the discovery of the ammunition and explosives was convenient for the government after its PR disaster in the deep South.

Authorities found that several firearms and rounds of ammunition came from the same sources and matched the evidence collected by police from scenes of unrest and from people arrested during the 2014 political turmoil, Pol Gen Srivara said.

An investigation found some political elements were prepared to bring the weapons to Bangkok to incite strife, he added.

The weapons were hidden in the area about three months ago, Pol Gen Srivara said, adding that the location straddles the borders between Chachoengsao, Nakhon Nayok and Pathum Thani, near to the capital.

Explosive Ordnance Disposal (EOD) officers have confirmed the cache was intentionally hidden rather than abandoned as the weapons are primed and ready for use.

On Wednesday, Pol Gen Srivara, along with other senior police officers and soldiers, inspected a rice field in Moo 15 of tambon Donchimplee in Bang Nam Prieo, where the cache was uncovered.

Pol Gen Srivara also led a team to inspect a house in tambon Chumpol in Nakhon Nayok's Ongkharak district, where police believed a man suspected of stashing the cache was staying.

The suspect was identified as 53-year-old Wattana Sabwichian, police said.

House owner Prayoon Bonsombat said he did not know Mr Wattana personally but a friend had requested the man be registered in his household so he could receive medical treatment nearby.

He is now believed to be taking shelter in Pathum Thani's Nong Sua district, police said.

Meanwhile, Nattawut Saikuar, a key figure of the red-shirt United Front for Democracy against Dictatorship (UDD), said he wondered why the news of such a large arms cache had emerged suddenly at this time. He said authorities must show proof to back their claims that it was destined to support unrest.

Mr Nattawut said the regime's credibility would be tarnished further if the issue was found to be an attempt to divert attention from a series of issues that are hurting its image.

These include its handling of anti-coal protests in the South and rumours that hazing led to a military cadet's death.

Korkaew Pikulthong, another key UDD figure, said the government's popularity has been dealt a huge blow since its cabinet trip to the South, and that the timing of the cache discovery was very convenient.

The government is facing a slew of economic, political and social problems at this time as people's incomes are not improving and parties are clamouring for change, said Surachart Bamrungsuk, a political scientist at Chulalongkorn University.

A political scientist who closely follows national security issues, but asked not to be named, said it would be hard for any group to move such a large amount of weapons without the military knowing about it.

He said arms traffickers may have dumped them or the government could have planted them as a diversionary tactic.