Somkid denies move to stay in politics after election

Gen Prawit Wongsuwon and Somkid Jatusripitak, both deputy prime ministers, deny claims a political party backed by the military will emerge to fight the next election. 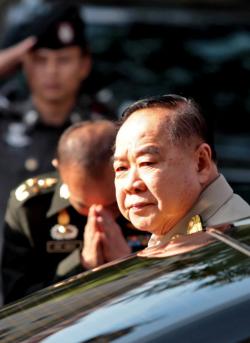 Deputy Prime Minister Prawit Wongsuwon emerges from his car at Government House where he chaired a meeting of the steering committee on national administration reform yesterday. Chanat Katanyu

Mr Somkid said there was nothing to the claim made by former Democrat Party MP Watchara Phetthong who told the media earlier there was an ongoing "plot" to form a military party which would support Mr Somkid as party leader.

The name of the party would include the word Pracharath, the government's public-private collaboration, he predicted.

Mr Somkid, however, dismissed the claim "I think you [the media] has got the wrong information. There's nothing to it," he said. "I'm over 60 years old now," the deputy prime minister said, suggesting he harbours no political ambitions. Asked to comment whether his name has come up in the context of helping the National Council for Peace and Order (NCPO) prolong its grip on power, Mr Somkid said he would rather keep working at the task he has been given by the government.

Gen Prawit said yesterday he had no idea if a military-back political party was being set up or if Mr Somkid would lead it.

Mr Watchara also asked politicians to stand against the proposal to disband ("reset") political parties and make them start again. He also hinted that a key conspirator in a military-backed party was a former kamnan from the South who was supporting Gen Prayut in this mission.

Democrat Party leader Abhisit Vejjajiva said yesterday he personally believed Mr Somkid would not accept the leadership of a party linked to the military.

Mr Abhisit said he was still close to Mr Somkid to a certain extent. The deputy premier has told him he had no intention of continuing a political career after the NCPO steps down. However, the Democrat leader said it is a matter of opinion whether Mr Somkid might want to support a political party in some other capacity. Mr Abhisit said parties have the right to support the military in running for the next poll. However, the support they give must be legitimate and the parties must not try to change the rules of the game for their own gains.

Pheu Thai Party acting deputy spokesman Jirayu Huangsap said establishing a military-backed party was not the issue. What is important, he stressed, is that such a party must declare to the people that it favours the military. Once that stand is made clear, people will decide whether they will vote for it.

Mr Jirayu added if Prime Minister Prayut Chan-o-cha wished to remain as prime minister, he must spell out how he plans to do so. If he wants to use a military-backed party as a vehicle to stay on in power, he must accept he has to fight like a politician.

Earlier, Somsak Kosaisuk, a former leader of the yellow-shirt movement, warned that a "military party" will not work. He said military-backed parties of the past, including the Manangkasila and Samakkhitham parties, failed because the people did not accept them. The Thai Rak Thai Party, which merged many parties together, also failed.

"The military parties of the past taught people a lesson. It's hard to predict, though, as nowadays we have freedom in social media. People's thinking cannot be so easily manipulated now," he said.

Mr Somsak said he had been aware of a plot to form a military-backed party for a while but was not sure of the details.