UNHAPPY: Wirat Kalayasiri says the order is tantamount to a reset of parties.

The Democrat Party has cried foul over the fresh Section 44 order, saying the new order will benefit emerging political parties at the expense of existing ones.

Prime Minister Prayut Chan-o-cha on Friday issued the order to address political parties' immediate concern that they could not meet the Jan 5 deadline under the new organic law that requires parties to update their memberships and registrations.

However, the order gives new parties a one-month head start over existing ones. Existing parties will not be able to begin the registration process until April 1 next year, while new parties can start forming on March 1.

Existing parties also say that requiring all party members to register again amounts to a "reset" that would open the door for some to defect to new groups. They suspect the regime is paving the way for a military-backed political party expected to be established to draw members of existing parties to back it and support Gen Prayut and the regime staying in power after an election expected in late 2018.

The Section 44 order was published in the Royal Gazette on Friday night with immediate effect. Section 44 of the previous 2017 interim charter has been carried over into the new constitution. 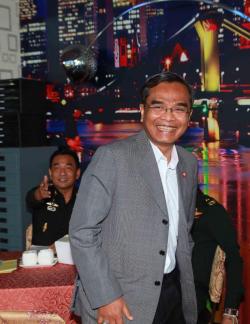 Wirat Kalayasiri, chief of the Democrat Party's legal team, said yesterday that the new order has presented difficulties to the party because all party members will have to reapply, which is tantamount to a reset of parties.

He said the fresh order will directly benefit emerging parties that can be registered from March 1 and can seek the green light from the National Council for Peace and Order (NCPO) to hold meetings.

"The purpose of setting up these new parties is well known,'' Mr Wirat said, referring to speculation about the establishment of a new military-backed party.

He expected established parties like the Democrat Party to resume political activities in June next year. This means new parties will have a three-month advantage over existing ones because existing parties will have to spend time preparing themselves.

Under the order, members of existing parties must produce letters to confirm their membership and pay party fees within 30 days from April 1 or they will lose their status.

Mr Nipit said it is nearly impossible for all party members to do so within that time.

"Members will not be able to do so in time. This will result in a drop in financial contributions to the party, less cooperation and fewer election campaigns. We have managed party membership for 71 years, but it [the NCPO order] will ruin it all in 30 days," Mr Nipit said.

According to figures supplied by the Election Commission in May, the Democrat Party has the largest party membership of 2.89 million, followed by Mahachon with 1.81 million, Bhumjaithai (153,087), and Pheu Thai (134,834).

Former Democrat MP Atthawit Suwanphakdi said the NCPO order is tantamount to a reset of political parties and will disrupt political reform efforts.

He said the order will adversely affect primary voting procedures in which party members will select potential candidates to contest elections.

Election Commission deputy secretary-general Jarungvith Phumma said the relationship between parties and their members now has a bottom-up approach. Parties will now attach more importance to their members.

Pol Col Jarungvith said he understood the difficulty of political parties that may lose members initially, but all parties and people will adjust in the long run.

He said the NCPO order is not likely to delay the election timeline as a survey of parties found they could update their membership databases in time.

The survey was done during the drafting of the organic law on political parties.

Constitution Drafting Committee chairman Meechai Ruchupan, who was responsible for drawing up the NCPO order, insisted that the order does not reset the status of members of existing parties.

The order aims to verify the existence of party members as they will play a greater role in activities such as the selection of potential candidates in primary voting procedures under the new organic law on political parties, Mr Meechai said.

Parties are required to elect party leaders and executives, write a party manifesto and regulations, and set up provincial branches within 90 days of the NCPO ban on political activities being lifted.

Originally, all this had to be done within 180 days of the organic law on political parties coming into effect on Oct 8.

The NCPO insisted that the ban on political activities will remain due to security concerns despite allowing some extra time for political parties to perform necessary activities.