Prime Minister Prayut Chan-o-cha said he hopes next year will be a "year of changes" which prepare the country for democracy and good governance, while also promising to put an end to his notoriously "grumpy" outbursts.

"I wish next year is a year of success, a year of changes -- a year of preparation for democracy and good governance," he announced, speaking after the mobile cabinet meeting in Sukhothai Tuesday.

"Come together and do this with your bodies, voices and minds to reduce conflicts and build reconciliation. Don't make me use law enforcement too much, so I have to ask everybody, as we are all Thai people," he said, adding that he hoped people enjoy their holidays, have safe trips, and enjoy the time with their families.

He also urged people to be careful, follow the laws and drive safely during the holiday period, saying he anticipated being in a better mood next year.

"The people want to see me smile and laugh, and want to hear me speak nicely. I promise to do my best. I will be in good humour next year, although some people make me grumpy. I will not be grumpy anymore. I promised myself that already," he said.

He thanked the local people of Phitsanulok and Sukhothai for their warm welcome. While saying he would consider development programmes for the communities, he said the cabinet did not discuss the Kaeng Sua Ten dam project this time as it is a sensitive issue about which people have conflicting opinions.

During the two-day trip to Phitsanulok and Sukhothai, the PM ordered related agencies to rev up prioritising infrastructure investment projects in northern Thailand, covering not only air but also land infrastructure, water management, tourism promotion and value addition to farm products.

The cabinet meeting approved 85 projects or activities as "New Year presents" for the people, including tax breaks for tourism spending in 55 provinces nationwide next year, low-interest loans for low-income people in the South and technology training programmes for the elderly and the disabled.

During a mobile cabinet meeting in Songkhla last month, Gen Prayut was asked whether he was using such trips to boost popularity and gain political advantages, which he denied, insisting that his first mobile cabinet trip to the far South was to discuss various high-value infrastructure projects.

However, during his visit there was a fracas between coal plant protesters and the authorities. About 500 people attended a rally against a proposed coal power plant in Songkhla's Thepha district. Sixteen were arrested after they clashed with police, resulting in three injuries.

On the subject of the roadmap to the election next year, as promised by Gen Prayut, National Legislative Assembly chairman Pornpetch Wichitcholchai said Tuesday that the laws governing MP election and senator selection must be considered carefully to make sure that they correlate with one another, as well as the organic law on political parties which was amended last Friday by the NCPO chief's order No 53/2017.

However, he said it was very unlikely that the organic law on MP election would be scrapped [dropped] by the NLA as speculated by Democrat Party's deputy leader Nipit Intarasombat who had suggested considering the changes using the NCPO chief's special power. 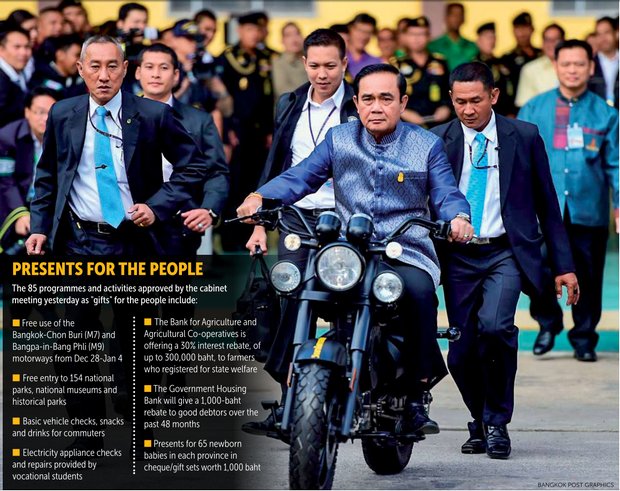 Constitution Drafting Committee member Chartchai Na Chiangmai said the NCPO chief's order which altered the organic law on political parties was unlikely to delay the poll. The NLA is expected to finish deliberation of the bills in late January, and he believed the four laws will come into effect in May at the latest which means a November election is still possible.

However, Gen Prayut's order has postponed the deadline for parties to update their membership database from Jan 5, with members now required to confirm membership and pay membership fees by the end of April.

Mr Chartchai denied the NCPO chief's order was "resetting" political parties' membership as some have alleged. He said political parties would have had to verify their members anyway, and changes made by the order only affected the time frame.

According to the organic law on political parties, existing political parties could ask the Interior Ministry to verify whether their members were still alive and whether their addresses are still correct. The NCPO order, on the other hand, said the members must send documents confirming their qualification and willingness to remain in the party by April. Anyone failing to do so will lose their membership automatically.