Privy Council president Prem Tinsulanonda warned Prime Minister Prayut Chan-o-cha Thursday that he has lost much of his support base but still has a chance to win the public over by serving as a positive role model.

Gen Prayut responded by indicating he has a list of populist policy plans up his sleeve including some aimed at improving stagnating wage levels.

"Tu has promised to bring happiness to the Thai people," Gen Prem, who ruled the country for a period in the 1980s, said using an affectionate nickname for Gen Prayut that has been widely adopted by his supporters. 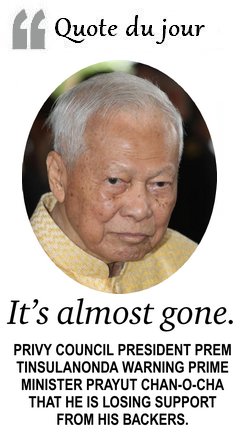 "He must stick to this goal and be determined to do everything in his power to make the public happier," he added after the premier led his ministers to show respects to Gen Prem for the New Year.

"Tu has used up almost all of his reserves [supporters]. They're almost gone. But if we can show to the people that he has good intentions toward them, more will come [to support him]," Gen Prem said.

"I hope he stays true and attracts more supporters. Tu can do it, we can do it, too -- and we are doing it," he added.

The former premier said the most important thing is to behave appropriately and act as a role model by displaying traditional Thai virtues, as the coup-installed regime continues to deal with graft and other scandals.

Gen Prayut said he hoped 2018 would prove to be a successful year in terms of bringing the nation closer together and fostering peace and economic development.

He said he is also mulling measures to help increase people's income levels and reduce the yawning wage gap in society.

After informal talks with Deputy Prime Minister and Defence Minister Prawit Wongsuwon and Interior Minister Anupong Paojinda, the premier admitted some of the ministers were becoming tired and discouraged by the strain of ruling the nation.

The premier also wished good health to Gen Prawit, who once served as Gen Prayut's boss in the military.

Gen Prawit was the centre of unsubstantiated rumours earlier this year suggesting his health was ailing as a result of work-related stress.

"We promise that next year we will work together for the good of the country and its future. My only [concern] is that I wish [Gen Prawit] good health," the prime minister said.

Gen Prawit found himself caught in the spotlight this month after online sleuths revealed he has been wearing a collection of luxury watches with some worth millions of baht.

This triggered a probe into whether he has declared these assets, as legally required, to put to bed any speculation they were acquired as a result of graft.

The National Anti-Corruption Commission (NACC) sent him a letter earlier in the month asking him to clarify the details surrounding one of the watches by Jan 8.

As the first watch in question, a Richard Mille, was found to have been omitted from Gen Prawit's list of declared assets, the scandal has embarrassed the regime which prides itself on implementing policies and measures to stamp out corruption and promote transparency.

Meanwhile, as the countdown to next November's general election ticks on, several parties are moving to challenge a new order issued by Gen Prayut -- in his capacity as chief of the National Council for Peace and Order (NCPO) chief -- regarding their membership databases.

The order, dated Dec 22, means new parties will not be able to register, and existing parties cannot update their databases until March or April.

It increases the risk of parties losing members to new party upstarts, including perhaps military parties, disgruntled politicians claim. All parties have been prohibited from engaging in political activities involving five or more people under another government order dating back to 2014.

The newer order says the longstanding ban can only be lifted when an organic bill on the election of MPs is passed. That bill is now being considered by the National Legislative Assembly (NLA).

The rival Pheu Thai and Democrat parties said this week they plan to ask the Constitutional Court to consider whether the latest order -- No.53/2017 -- runs counter to the charter.

Meanwhile, NLA member Pornpetch Wichitcholchai said the order was legal according to at least one provision in the current charter, which was royally endorsed earlier this year.

"Parties can file complaints with the Constitutional Court, but whether the court accepts them is another issue," he said.