Prime Minister Prayut poses for a photo with influential politicians in Nakhon Pathom, including four brothers from the Sasomsap family. The premier insists he is not teaming up with any politicians in the lead-up to the general election next November. (Photo from Watana Muangsook Facebook page)

Prime Minister Prayut Chan-o-cha on Friday dismissed a rumour the military regime might have already secured a political deal with politicians from the Sasomsap family who wield political influence in Nakhon Pathom province.

He firmly denied the rumour when asked about a picture of him appearing with his deputy, Gen Chatchai Sarikulya, and four Sasomsap brothers who are high-profile politicians based in Nakhon Pathom.

The picture was posted on the Facebook page of key Pheu Thai figure Watana Muangsook, a regular regime critic.

"I do not have any political deals with anyone because my duty here is to ensure national security and strength," the prime minister said.

He said he has no say over who will be with what political party in the next general election because he will not be involved in the race and he could not care less who will be in the government or the opposition.

As for the picture of him taken with the Sasomsaps, Gen Prayut said he normally agreed to any request by anyone to have a photo taken with him.

"I've had my picture taken with people countless times. I agree to have my photo taken with anyone who asks," he said. 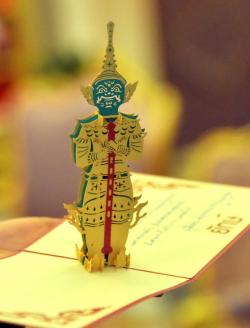 A New Year card featuring a giant demon from the Ramakien was the media's gift to Prime Minister Prayut Chan-o-cha. Reporters said the demon's many faces reflected the many roles of the PM as well as his many moods. (Photo by Government House)

And at times when he goes on trips to the provinces, politicians come with locals who show up to greet him and he has no problem with that, said Gen Prayut.

When he visited Sukhothai recently, for instance, he said some politicians came to greet him on his arrival and discussed general issues with him.

"We talked about nothing in particular. I inquired about how the locals were doing and I encouraged them [the politicians] to help take care of the people in the province," he said.

When asked when the photo with the Sasomsaps was taken, Gen Prayut said he could not remember as was some time ago. The picture was taken after a round of golf.

He said he did not even know whose political stronghold he was in when he went to play golf.

"There were a lot of people there that day. Who would ever want to seal any political deal in front of so many people? And if I really had intended to seek a deal, I wouldn't have done so in a public place," said Gen Prayut.

When suggested by reporters the picture of him taken with the Sasomsaps had caught public attention possibly because it was published during a time when there were rumours about a new political party being formed to support him to remain the prime minister after the next election, Gen Prayut said: "Don't ever get paranoid about me."

The card features a giant demon with a green face and a golden outfit. The character is derived from the Ramakien, the Thai version of the ancient Indian epic the Ramayana. The right side of the card contains New Year greetings from the media with the word yak (giant) at the bottom.

The reporters compared Gen Prayut to the demon giant in the sense that the demon has several faces while the prime minister has several tasks requiring him to perform different roles.

The comparison also reflected his moods. Sometimes, he expresses anger at or in front of reporters when he is asked certain questions. He was also reported from time to time having vented his frustration at some politicians over what he believed were their intentions to instigate conflicts.

Despite his temper, the reporters said he was generally friendly with them and sometimes spoke in jest while keeping a straight face.

In response to the media's New Year greeting, Gen Prayut said his heart was always with the Thai people and the media.

He expressed his sympathy for the difficult business environment in which many media outlets, particularly the print industry, were struggling to stay afloat.