Premier defends deputy as flak rains down on both

He insisted the case was "a personal matter" and he was not required to step in at this time.

"You may forget that this is a personal matter... a personal flaw," he said Tuesday.

"There is already a law to deal with this. It should be left to the anti-graft agency to handle," Gen Prayut added.

He was responding to criticism from the public that the premier has taken no action in relation to the snowballing scandal.

The National Anti-Corruption Commission (NACC) will announce any progress of its probe and the public must be patient, he said.

"It would be a different matter if it involved any misspending of the state budget. Don't mix the two issues up. Just let the NACC investigate according to legal procedures," Gen Prayut said.

He insisted he was not defending Gen Prawit or trying to conceal anything.

Gen Prawit previously said he was ready to resign if the national graft-busting agency decides there are sufficient grounds to pursue a case against him.

Gen Prayut said he was not employing "double standards" by failing to exercise his special power granted under Section 44 to suspend Gen Prawit from duty despite doing so for other officials whose feathers have been tarred.

"I used Section 44 to punish others because the agencies that probed them recommended they be suspended. That doesn't mean I can just use it with anyone. In this case, we need to see if that's the NACC's judgement."

The NACC launched its probe following public criticism after suspicions emerged that Gen Prawit had failed to report over 20 expensive watches among his declared assets and liabilities as required by the anti-graft agency.

The popular CSI LA Facebook page has spotted at least 25 luxury watches worth about 39.5 million baht on the deputy premier's wrists.

Gen Prayut dismissed speculation that Gen Prawit will resign. A source at the NACC said its secretary-general, Worawit Sukboon, will hold a briefing today to update the media on the probe.

Mana Nimitmongkol, secretary-general of the Anti-Corruption Organisation of Thailand, said the matter cannot be regarded as personal given that both the prime minister and deputy prime minister are public office-holders who exercise state power. 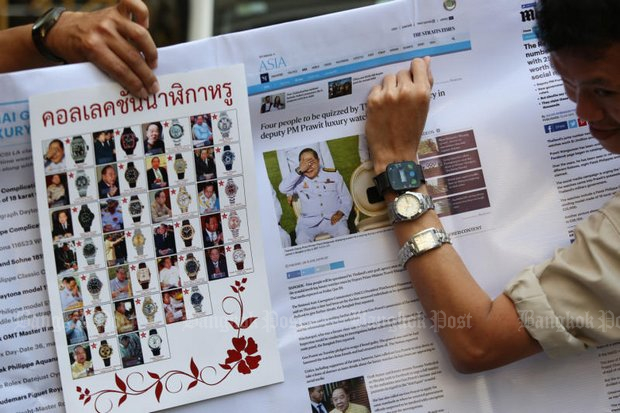 Activists and satirists with multiple watches and evidence the scandal has gone worldwide were out in force at the cabinet meeting at Government House Tuesday. Prime Minister Prayut Chan-o-cha stood firmly behind his friend and Deputy PM Gen Prawit Wongsuwan. (Photos by Wichan Charoenkiatpakul)

The public wants and has a right to know if they are honest, Mr Mana said.

They are not interested in his personal taste but whether he earns enough money to afford all these luxury watches, he said.

"We've heard tidbits from various sources but we won't know what the facts are until Gen Prawit decides to confirm them," he said.

"In my opinion he should make this clear to the public."

Mr Abhisit said earlier the issue has undermined the public's confidence in Gen Prawit and the regime, making the government's work harder and its popularity suffer.

He said he was only responding to a question from one media outlet about what he would do if he were in Gen Prawit's shoes, and answered that he thought he would resign. He emphasised that he never said Gen Prawit must quit.

Moreover, when asked whether he had known about the lending and borrowing of luxury watches among Gen Prawit's social circle, he said he had no knowledge of this as it would have been done among close friends.

Gen Prawit claims all of the expensive watches he was photographed wearing belonged to his friends and have since been returned.

Tida Thavornset, leader of the red-shirt United Front for Democracy against Dictatorship, said Gen Prawit should resign or risk undermining the credibility of the government.

Ms Tida said she was not convinced the NACC would be able to conduct a fair and transparent probe because its chairman was a former subordinate of Gen Prawit's.

Ms Rosana said the director-general of the Customs Department has the authority to order him to explain whether the watches were properly taxed.

If Gen Prawit still maintains he borrowed them from friends, he must produce proof to back up his claims, such as receipts and tax invoices, she added. She said the Revenue Department should also look into the issue.

If the watches are confirmed as belonging to Gen Prawit, the department must also investigate whether he paid the correct taxes, she said. "Any action or inaction by the two departments will prove whether the legal mechanisms cited by the prime minister are efficient considering that the person under investigation holds a high position second only to the prime minister," Ms Rosana said.

Below, activist Ekachai Hongkangwan holds a poster showing foreign media reports about the luxury wristwatches worn by Deputy Prime Minister Prawit Wongsuwon as he arrives at Government House  to present Gen Prawit with more watches as mock gifts. Mr Ekachai later posted on Facebook that he was assaulted by a man identified as Ritthikrai Chaiwannasat on Soi Lat Phrao 107 after leaving Government House.