CROWD PLEASER: Rome Rangsiman, a key member of New Democracy Movement, takes part in activities in Bangkok's Pathumwan intersection to oppose attempts to further delay elections after the passage of an election bill which is likely to see a general election pushed back to February next year. (Photos by Pattarapong Chatpattarasill)

Prospects of a new round of anti-government protests built on Saturday as various dissident groups launched activities in the capital and elsewhere in the country to demonstrate their dissatisfaction with the military regime.

Their voices joined that of the People Go Network (PGN), an umbrella group of activists and academics which launched a 450km civic march from Pathum Thani to Khon Kaen last week.

The allied groups are opposed to a potential delay to the general election, the luxury watch scandal encircling the deputy prime minister, and alleged attempts by the government to restrict people's rights.

The dissidents gained momentum as the Administrative Court on Saturday granted an injunction against the police to the PGN as it pursues its "We Walk" march.

The PGN launched its march on Jan 20, but it was initially blocked by police, forcing members to split up and restart the walk from alternative locations.

The Administrative Court, however, has now ordered police not to obstruct the march and to ensure safety for its participants.

In its order, the court told the Royal Thai Police (RTP) and its officers not to disrupt "We Walk" as long as it remains lawful and peaceful. Police are also required to step up safety for the participants until the activity ends on Feb 17. PGN members had reached Nakhon Ratchasima as of on Saturday.

However, in case participants break any applicable laws, police may take appropriate action, including seeking a court order to halt the march.

In Bangkok, student activists of the New Democracy Movement gathered on the Skywalk near Pathumwan intersection last night to oppose any delay to the general election, which Gen Prayut had promised would take place in November.

"I think it is quite clear that the NCPO [National Council for Peace and Order] is simply buying more time to get more leverage. They want more time to build more trust, while gathering more power from various groups" Mr Sirawit said.

Several activists pointed out flaws in the military government's handling of its process of returning democracy to Thailand, while others continued to bash deputy PM Gen Prawit Wongsuwon over his 25 luxury watches scandal. One of the attendees in the event was veteran activist Veera Somkwamkid, who expressed his doubts over the government's ability to tackle corruption problems effectively.

"The NCPO and the prime minister have repeated their commitment to fight corruption in the country," Mr Veera said.

"This is not simply a goal of the government but of everyone in the country.

"There are no colours right now," he said, in an apparent reference to the past yellow shirt/red shirt political divide.

"It's all about joining hands and removing corruption from the country.

"The problem is we cannot rely on the government because they are in fact the ones who are not transparent."

Red shirt leader Sombat Boonngamanong, who also attended the gathering, said any delay to the election would pose a major threat to the stability of the country.

"The European Union has told the military government to uphold its promises. The [election] date has been moved three or four times already, and they [the government] are really testing how much they can aggravate the people," Mr Sombat said.

The New Democracy Movement added it will continue to pressure the government and Gen Prayut to dismiss Gen Prawit and to keep his promise to holding the election this year. They will gather again in the same spot on Feb 10.

Another PGN-allied group will gather at Lumpini Park every Sunday, starting today, from 5pm-6.30pm.

In Songkhla, members of 19 civic organisations walked from Hat Yai municipality to Sena Narong army camp in Hat Yai to voice their grievances over several state projects in the South and to support the PGN.

Their activity defied a police ban. The group has requested permission for a peaceful gathering, but were denied according to the NCPO's ban on political gatherings of more than five people.

The dissidents are opposed to several sizeable projects in Songkhla and Satun, including a deep-sea port in Songkhla, a coal-fired power plant in Thepha district, and a 142km Southern Land Bridge linking the coastlines of the Andaman Sea and the Gulf of Thailand.

They said the projects threaten the livelihoods of locals and need to be thoroughly reviewed with input from the public. 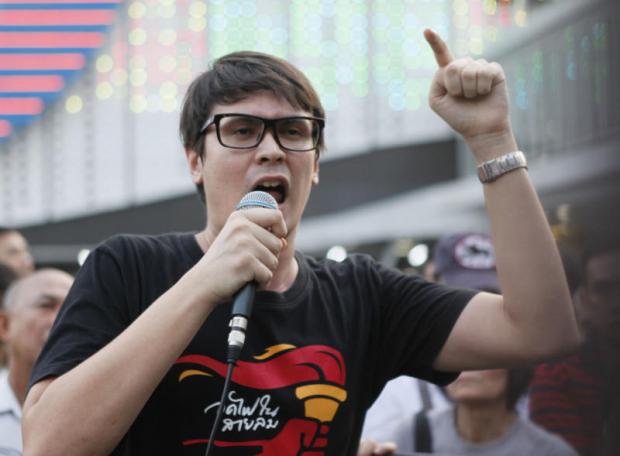 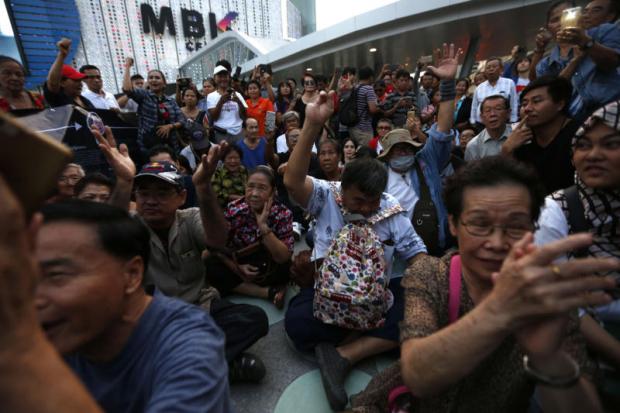 HANDS UP FOR DEMOCRACY: Demonstrators in Bangkok's Pathumwan intersection join activities to oppose attempts by the government to further delay elections, as Rome Rangsiman, top left, a key member of the New Democracy Movement, delivers a speech.