Government says it's keen to listen to the people as it aims for 'sustainable development', but parties say it is just after votes

Prime Minister Prayut Chan-o-cha raised eyebrows and triggered some speculation when he mentioned the term 'Thai niyom' in his Children's Day speech early this month.

A few days later as the public was trying to digest its meaning and his implication, Gen Prayut clarified the term in a speech delivered to mark Teachers' Day.

Thai niyom, as put by Gen Prayut as "Thainess without ignoring global practices and international norm", did not really catch on until last week when the government rolled out a Thai Niyom Yangyeun programme with the prime minister's endorsement. 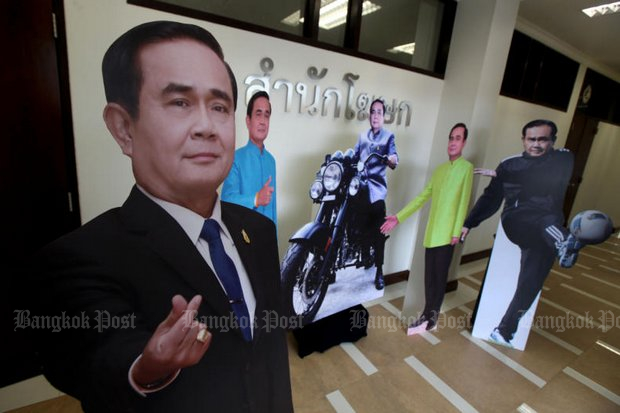 Born on Children's Day, amongst the cardboard cutouts of Prime Minister Prayut Chan-o-cha, Thai Niyom is either a top-down programme to listen to the people or - critics say - a scheme to maintain the regime's control. (Photo by Thiti Wannamontha)

In his weekly address to the nation last Friday, the premier discussed the term in more detail, saying it was neither nationalism nor patriotism. It was also different from populism.

"It is the extent of the pracharat (people's state) policy which emphasises internal growth and public participation and support while the government seeks cooperation from the private sector and the academic sector. Cooperation creates the power of three -- government, public and private sector," he said.

According to the prime minister, the approach will lead to sustainability because it caters to the people's specific needs and when applied to national administration, Thai niyom is a concept allowing the government to understand people's needs.

However, political parties are not alarmed by the regime's new programme, which will see 7,463 teams sent to conduct surveys nationwide to gauge the public's feelings about a range of pressing issues ahead of the general election.

According to sources, even though provincial officials under supervision of the Interior Ministry are the key to driving the scheme, several more from the Internal Security Operations Command (Isoc) are likely to be roped in to help.

The programme, according to the sources, is likely to see a massive moblisation of manpower and funds.

In an interview with the Bangkok Post, Democrat Party leader Abhisit Vejjajiva said he is not concerned about the programme but he hopes the prime minister knows what he is doing. "If what he does helps get to the people and improve the government's performance, it's a good thing. But if it becomes clear that he is using state power for a political purpose, he is setting a bad example. I hope he is clear about his purpose," he said.

Interior Minister Anupong Paojinda denied the programme was aimed at boosting popularity for the military government, insisting it was the government's duty to take good care of the people.

According to the Prime Minister's Office, a 61-member panel known as "steering committee for development under sustainable Thai Niyom Yangyeun (Sustainable Thai-ism) projects" was set up to supervise the programme. 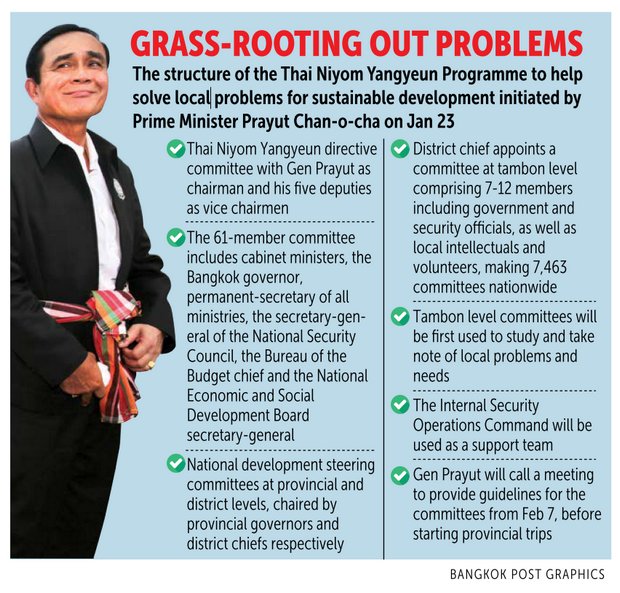 Gen Prayut chairs the committee himself with the Interior Ministry serving as a core mechanism in driving the programme. The committee will work with provincial governors, local officials such as district chiefs and community volunteers to ensure help reaches the people.

According to the PM's Office, the programme aims to make state agencies combine efforts and lift people's living standards to achieve the goals set by the government's 20-year national strategy.

Each tambon (sub-district) team will have 7-12 members, consisting of local officials, security personnel, academics and volunteers brought together under the Tam Kwam Dee Duay Hua Jai (Do good deeds by hearts) project.

During Feb 7-13, the committee chaired by Gen Prayut will lay down policy guidelines to provincial governors and various authorities. During Feb 14-23, committees at other levels will meet to share their work.

The highlight of the programme is said to be the prime minister's tour of 18 provinces, starting on Feb 8. He is supposed to meet low-income earners who have registered with the government.

Democrat Party deputy leader Nipit Intarasombat said he believes the idea was inspired by an example in China, but it would not work in Thailand.

"The people do not want to talk to government officials on these matters but they want MPs as their representatives," he said. "The Chinese system is communism; communism and a dictatorship can get along. If you really want it that way, you [the government] have to declare the country's system is a dictatorship, but if you insist on [democratic elections] in November or in February, this will not work."

While regarding the programme as a political tool to woo votes, a Pheu Thai source insists it will not lure away the party's supporters.

"We are confident the people are with democracy. No matter what the military does, they will have little impact on us," said the source.

The former ruling party also warned the move could even backfire on the regime in the wake of the NLA's decision to delay the enforcement of the organic bill on elections of MPs. "This could be a misstep," said the source.

The source said politicians and parties have little or no concern about the programme because they know it is unlikely to damage their support bases.

According to the source, the programme reflects the regime's intention to prolong its stay in power, which may lead to protests. "This is uglier than the populist policy. It indicates the regime wants to return to power after an election and it is making early plans for that," said the source.

Similarly, Chulalongkorn University political scientist Weerasak Krueathep said government officials are different from canvassers and going to locals empty-handed, without any gifts or promise of benefits, would not woo people's support.