Thailand is tightening its strategic partnerships with individual EU nations after the bloc agreed last December to resume political contact "at all levels", more than three years after suspending them in protest against the 2014 military coup.

Auramon Supthaweethum, director-general of the Trade Negotiations Department, said responsible authorities in the department brainstormed with related state and private sector representatives, including the International Trade Promotion Department, the Foreign Ministry, the Board of Investment and the Joint Standing Committee on Commerce, Industry and Banking (JSCCIB), to build up strategic partnerships with the EU and individual nations, particularly Britain and France.

"Thailand and many EU members have a regular venue for talks and cooperation," Mrs Auramon said. "With France, for instance, there is close cooperation between the JSCCIB and France's Mouvement des Entreprises de France, the largest employer federation there that jointly holds the Thailand-France Business Forum every year.

"A joint meeting for high-level economic dialogue is also held every year between Thailand and French officials." 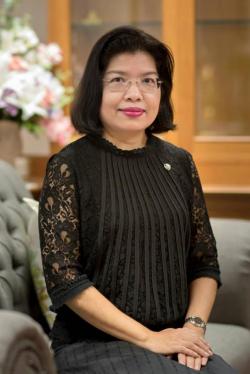 Mrs Auramon says the EU can provide technology to aid the 4.0 drive

She said the department is monitoring the Brexit transition talks between Britain and the EU before moving ahead with further free-trade agreement (FTA) talks.

"Other EU nations such as Germany, the Netherlands, Belgium and Italy are also target countries that Thailand plans to tighten trade and investment cooperation with," Mrs Auramon said. "Those countries have advanced technology that can help support the Thailand 4.0 strategy and investment in the Eastern Economic Corridor."

She said Thailand is scheduled to hold a trade mission and promote Thailand's investment in those EU countries.

Authorities were also told to map out an official visit to the EU by Thai delegates some time this year to further bolster ties.

Mr Somkid said 2018 is an appropriate time to rehabilitate the EU relationship, both bilaterally and multilaterally, as well as resume Thai-EU FTA talks.

He said he favours bilateral cooperation or strategic partnerships with individual EU nations over deals with the bloc as a whole.

Negotiations for a Thai-EU FTA were formally launched on March 6, 2013. The goal was a comprehensive FTA covering tariffs, non-tariff barriers and other trade-related issues such as services, investment, procurement, intellectual property, regulatory issues, competition and sustainable development.

In June 2015, the EU said it would delay signing an agreement on closer economic and political ties and demanded a swift return to democracy.

In 2016, the EU was Thailand's fourth-largest trading partner in the world and ranked the second-largest investor here.

EU investment in Thailand was estimated at $6.73 billion in 2016, with the top five investors being Germany, Britain, the Netherlands, France and Italy.