Pro-democracy activist Nuttaa Mahattana (centre) and fellow activists have their mouths taped as a symbolic protest against the military junta at a shopping mall in Bangkok, Feb 1 2018. (EPA photo)

A news conference by the Democracy Restoration Group was called off on Tuesday following a police warning not to hold the event or risk violating a junta ban on public gatherings.

Activists had planned to hold a news conference at the Maneeya Center in Bangkok - home to the Foreign Correspondents' Club of Thailand (FCCT) - to call on the junta to keep its promise of an election this year, but police issued a warning that stopped the event from going ahead.

The meeting was led by Nuttaa Mahattana, a television reporter and activist, who spoke to Thai and foreign reporters gathered outside the building on Tuesday.

"The police contacted the management of the FCCT yesterday. They were worried that a press conference here would breach security laws and constitute an illegal assembly," Ms Nuttaa told reporters outside the FCCT on Tuesday. 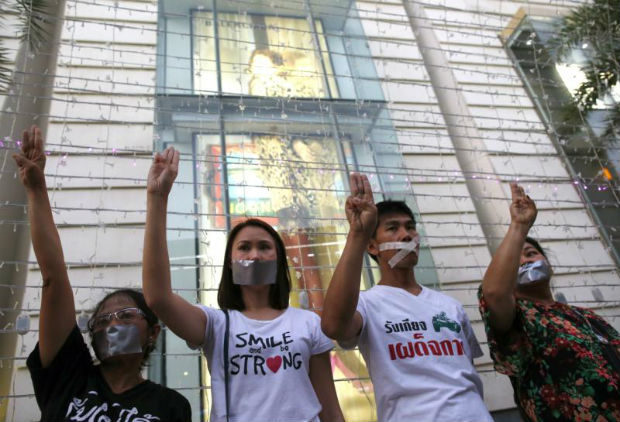 Pro-democracy activist Nuttaa Mahattana (second left) and fellow activists have their mouths taped as a symbolic protest against the military junta at a shopping mall in Bangkok, Feb 1, 2018. (EPA photo)

She is among seven activists from the Democracy Restoration Group who have been summoned by police to face charges of defying a ban on public gatherings after organising a protest in downtown Bangkok last month demanding that the junta not postpone a general election that is scheduled for this year.

The police crackdown comes amid growing disgruntlement over the military government and a scandal involving the deputy prime minister that has led thousands to call for his immediate resignation.

Prime Minister Prayuth Chan-ocha has said an election will be held in November but there is growing uncertainty as to whether the date will be kept.

Protests calling for the junta, formally known as the National Council for Peace and Order (NCPO), to return Thailand to civilian governance have mushroomed in recent weeks.