In a move greeted with fresh scepticism from politicians, the government said on Friday the date for the general election should be decided by June this year.

Mr Wissanu gave his assurances over the election timeline after Pornpetch Wichitcholchai, president of the National Legislative Assembly (NLA), pointed out the election could be pushed back to March next year.

The regime has been under fire after proffering several poll dates which it has failed to abide by.

The announcement by Prime Minister Prayut Chan-o-cha that the election would be held in November this year was recently undermined after the NLA voted to suspend enforcement of an organic bill on MPs for 90 days.

This pushes back the poll to at least February next year. But there is a possibility of further delays if the bill on MP elections and another on the selection of senators are dropped or sent for a judicial review by the Constitutional Court.

Mr Wissanu said the June meeting will be for all the major players to decide upon a final course of action regarding a definitive election timeline, and insisted there would then be no further delays.

"I don't want to say if the election will take place in March next year because the matter will be cleared up in June when all the organic laws are put into force," Mr Wissanu said.

"It's [the meeting] for transparency. The meeting can agree to make the election take place early but that also depends on whether the [political] parties are ready."

Mr Wissanu said preparing for national polls is no easy task as parties contesting the election are now required to conduct a primary vote, which is a new element introduced in the organic law on political parties.

He said the planned meeting is in line with the National Council for Peace and Order's (NCPO) December order extending the deadlines for old and new parties to complete the processes required by the organic law governing political parties.

In the same order, after the organic bill on election of MPs is implemented, the NCPO should hold talks with relevant parties to make a plan for the general election including lifting restrictions on political activities, he added. 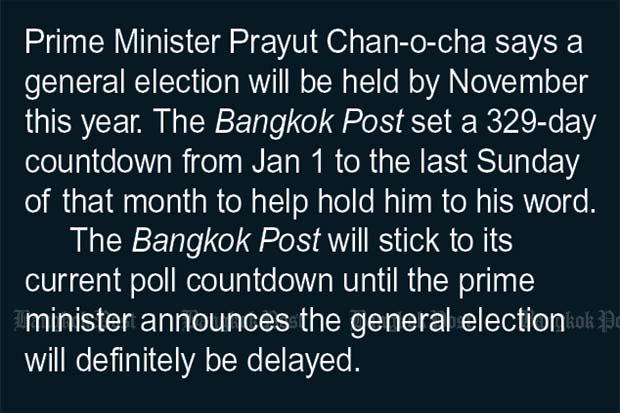 The two crucial organic bills on the election of MPs and selection of senators are up for a review by a tripartite panel, which expects to finish its work by the end of the month.

The bills will be returned to the NLA for a vote after that and they are widely expected to be published in the Royal Gazette in June.

The tripartite panel, comprising representatives from the NLA, EC and the Constitution Drafting Committee (CDC), was set up after the three parties failed to agree on the bill while it was being deliberated by the NLA. If this panel cannot agree, the NLA may scrap it or ask for a Constitutional Court review.

Samart Kaewmeechai, a former MP for Pheu Thai and legal specialist, poured scorn on Mr Wissanu's remarks, saying that despite assurances from the prime minister over the road map, the election had been repeatedly pushed back.

"I'm not sure we can trust his [Mr Wissanu's] words, only those of people directly involved in the matter, such as the EC, which has details about the plan for an election," he said.

The Pheu Thai politician said the EC, which is in charge of holding elections, should work with the government to draw up an election timeline and share it with the public.

"If Mr Wissanu wants people to believe his words, he should guarantee that the two election bills are passed and not dropped as is widely speculated," he said.

Mr Samart also called on the regime to refrain from influencing the NLA on how to vote on the two election bills.

Democrat leader Abhisit Vejjajiva on Friday urged the NCPO to relax the ban on political activities to create a friendlier climate during this uncertain time.

Commenting on a possibility that the two organic bills on MPs and senators would be voted down by the NLA, he said the issue would be entirely up to the NCPO. He said the regime could use its overwhelming power to make changes to the laws.

Meanwhile, Jate Siratharanont, a spokesman for the NLA whip, denied accusations lawmakers were conspiring to force the bills to be dropped.

According to Mr Jate, the committee is expected to focus on the controversial clause allowing entertainment shows during campaigns and the scrapping of cross-voting for Senate candidates and the reduced number of groups of candidates.

He said the two election bills should sail through the NLA, which would then move the country toward the much-anticipated election. 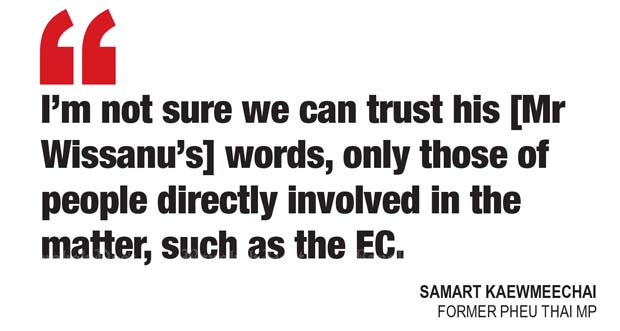