Pheu Thai Party heavyweight Khunying Sudarat Keyuraphan speaks her mind with Bangkok Post's Nattaya Chetchotiros about her determination to pull the party out of the mire of political conflict and her "blueprint" to steer the country forward.

Q: Are you worried about the movements of several former Pheu Thai MPs who met de facto party leader Thaksin Shinawatra to express their disapproval of you becoming the new party leader?

A: No worry at all. I have never been concerned as to whether Pheu Thai will look for a new leader. Actually, there is already the party leader -- Pol Lt Gen Viroj Pao-in -- and he is doing a good job. He has the respect of all of us. So, there is no need for change.

But, whenever the NCPO [National Council for Peace and Order] lifts the ban on political activities, and political parties are allowed to hold meetings, and if Pheu Thai wants to have a new leader, there will be no problem, either. The party has many capable and experienced personnel. Therefore, the issue of a party leader is not something to worry about at this moment.

We think of the party like it's our home. When our home is damaged and needs repairs, all family members should lend a hand to fix it. Under the current political circumstances, the laws decreed by the NCPO are meant to undermine political parties and politicians. Anyone who is pursuing a political career right now is in grave danger. It's not the time to think of self-interest, but it's about self-sacrifice.

Therefore, it would be best to give moral support to whoever is thoughtful enough to help fix the home. Pheu Thai is like a home which was devastated and left in ruins. So, I now see myself as an architect carrying a blueprint and thinking of how to rebuild a home that is both strong and beautiful, and presenting the blueprint to other family members. If they accept it, we will do the work for them. If they decline, so be it.

Our main focus has been on how the party will move forward, which is more important than who will be the candidates for party leadership ... the blueprint which will be presented to members when a party meeting is permitted [by the NCPO] is as follows:

1. Pheu Thai will try in every possible way to ease and end conflict and disharmony in the country. We will not let anyone blame us for being the cause of the conflict ... pointing a finger of blame at each other is useless. We need to tackle our own problems first, rather than wasting time making excuses. Anything that we did in the past which upset people must not be repeated. Anything that makes the people happy, just keep it up. Politicians must put the people's happiness first, and we must be the ones who douse the flames of the conflict. If you vote for Pheu Thai, the country must get peace.

2. There are many ways to manage conflict and Pheu Thai must no longer support a struggle that is outside the [parliamentary] system. We must believe in the parliamentary system ... so as to prevent the military from using any excuse to roll out the tanks. We've had more than 20 coups. If the coups had worked, the country would have been better off a long time ago.

3. Pheu Thai must help the country out of the mire of conflict through peaceful and democratic means. If others, such as the military, do not help, the people will pressure them.

4. Pheu Thai is a political institution. The party must strive to be a pillar of strength to help the people solve pressing problems. We must not abandon the party's ideology of working for the sake of the country, religion and the King.

5. The party must take a central role in tackling poverty, which is our strength. We must find ways to solve bread-and-butter issues to help people who are in trouble.

Q: Can you deal with factions inside the party which still oppose you?

A: I realise that I am alone and am just an average person in the organisation. But I give this organisation my all. If the party can adjust, reduce its own problems and work for the public good, this will also benefit me in the end. I am alone and there is not much I can do. My blueprint will be presented to all the party's stakeholders. If they decide against it, so be it, I think this is the best I can offer to this home.

I work for the party not because I want to be a candidate [for party leader]. It is still uncertain whether I will contest the election. It is easy to be put in jail under this constitution. 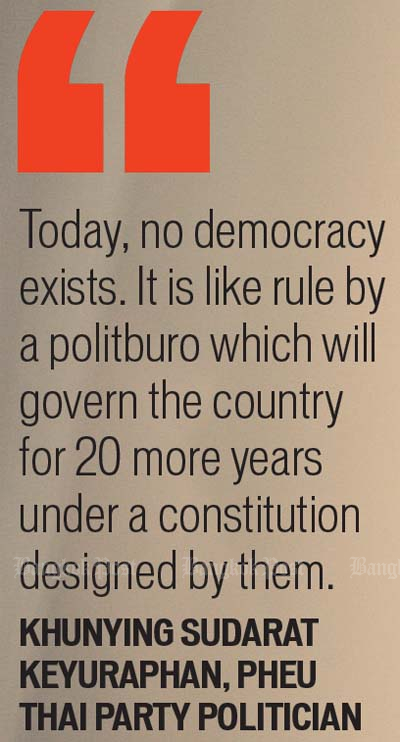 Q: After Thaksin [Shinawatra] told those former MPs to stop criticising you, do you think who will get the support of most party members when a new leader is to be chosen?

A: I don't know. I only think of presenting the blueprint. It is up to all in the party.

Q: Are you prepared to work with the military as they are unlikely to step down from power after the election?

A: This never crosses my mind. I come from different backgrounds from them. We were elected by the people. The people are our bosses. But they come to power by means of their weapons, their guns. These two systems cannot work together. I never thought of working with the military.

Right now, many political parties are prepared to work for or collaborate with the military because they think that they may attain power that way. Parties with ideologies must not work with the military to achieve power.

Q: Does this mean you shut the door on a chance of working with the military and you are ready to be in opposition? The poll-related laws are designed to prevent any parties from gaining a House majority to form a government.

A: We are a political party and are ready to be the opposition. I think political parties should join hands to push for the return of power to the people and ensure a smooth election.

Today, no democracy exists. It is like rule by a politburo which will govern the country for 20 more years under a constitution designed by them. Politicians must join hands rather than be exploited by the military.