Prime Minister Prayut Chan-o-cha has announced the general election will be held no later than next February, but parties have poured scorn on his latest promise after the premier said late last year the poll would take place this November.

Gen Prayut explained Tuesday the new deadline was due to a 90-day extension of the enforcement of an organic bill on the election of MPs that is a prerequisite to holding the national election.

The National Legislative Assembly (NLA) voted on Jan 25 to extend enforcement of the bill by this length of time.

But politicians from key parties were not convinced by the premier's remarks. 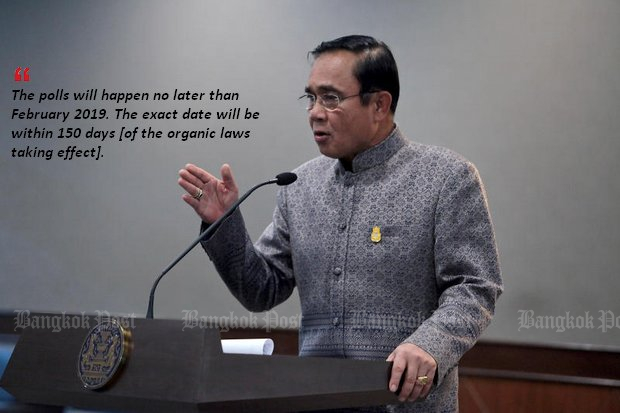 Reaction to the sixth 'promise' by Prime Minister Prayut Chan-o-cha to hold an election has been greeting mostly with scorn, doubt and criticism. (Photo by Chanat Katanyu)

"From what he has said recently, we can't believe what he says right now. His comments are no longer trustworthy,'' Mr Nipit said.

Chaturon Chaisaeng, a key figure in the Pheu Thai Party,echoed similar sentiments. He said Gen Prayut has lost all of his credibility after promising election dates and then failing to honour those commitments.

He said the regime was attempting to shore up its power so it can remain at the helm after the election.

But there is no guarantee a new military-backed political party, if created, would be sufficiently competent to run the country, Mr Chaturon said.

As such, the regime is playing for time to undermine existing parties and pressure them into supporting it while it tries to forge a new party of its own, he said.

"There are now two major parties but if they don't support the National Council for Peace and Order [NCPO], then forming an NCPO-sponsored government would be impossible,'' Mr Chaturon said.

Kalin Sarasin, chairman of the Thai Chamber of Commerce, said a February election would not negatively impact trade or investment.

"However, it should be held transparently and fairly,'' he cautioned.

Gen Prayut said last October he would announce the exact date of the election this June but was targeting November. That is the most precise date he has given since seizing power in a 2014 military coup.

Gen Prayut has given at least three different election dates so far, only to push them back citing concern over changes to the constitution and security issues. 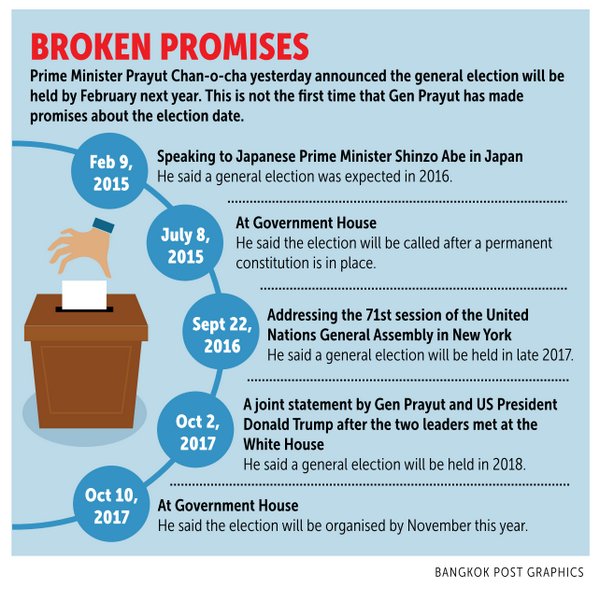 The share market leapt Tuesday owing to various factors, including the election news. It increased 18.07 points to 1,852.51 in afternoon trading before sliding back to close at 1,830.39 with 103.7 billion baht being actively traded.

Gen Prayut also said the NCPO will consider on a case-by-case basis whether to allow any new political party to engage in political activities. "New parties can start registering [tomorrow]. They are not well-enough prepared so we should give them some leeway," he said.

The new parties would then be allowed to hold meetings but only on essential issues such as setting party regulations.

"Apart from that, any activity will need to be approved on an individual basis by the NCPO," the premier said.

After the organic bills on the election of MPs and the selection of senators are passed in March they will be submitted for royal endorsement. This means they should come into effect by June, after which the 150-day countdown to the election can begin, Gen Prayut said.

A panel made up of 11 representatives from the NLA, the Constitution Drafting Committee (CDC) and the Election Commission (EC) are thrashing out their differences over the two bills after they were passed by the NLA.

"Once the laws come into force, a meeting will be held between the 'Five Rivers' [pillars of power] and political parties to set the date of the polls, but it must be no later than February," Gen Prayut said.

He was referring to the five bodies set up by the coupmakers to govern -- the NCPO, cabinet, NLA, CDC and now-defunct National Reform Steering Assembly.

"The polls will happen no later than February 2019," he said. "The exact date will be within 150 days [of the organic laws taking effect]," he added.

Commenting on the regime's ban on political activities, he said: "If everybody comes out, what will happen once the ban is lifted?"

Somchai Sawaengkarn, a NLA whip, said the two revised bills should be returned to the NLA on March 8.