The regime has threatened to charge Thanathorn Juangroongruangkit with illegal political activity after his live Facebook interview. (Screen cap FB/the101.world)

The regime has warned so-called new-generation politicians seeking to set up parties that are offering themselves as alternatives to challenge the regime not to cross the line.

Deputy Prime Minister Wissanu Krea-ngam said Wednesday the National Council for Peace and Order (NCPO) is keeping a close watch on the groups.

As political activities and election campaigns are not allowed yet, the NCPO may give them warnings or put the brakes on their activities if they go too far, Mr Wissanu said.

He was speaking after Thanathorn Juangroongruangkit, the 39-year-old executive vice-president of the Thai Summit Group, one of the country's largest auto parts makers, gave an interview aired on The101.world's Facebook Live account on Monday.

Eyes are now on Mr Thanathorn who has expressed a desire to form a new party as an alternative catering to younger voters with its prospective founders promising a radical departure from the political establishment.

Mr Thanathorn said he would wait until the second half of this month before deciding whether to register a party with the Election Commission (EC).

His likely co-founder is 38-year-old Piyabutr Saengkanokkul, a law lecturer at Thammasat University and noted member of the Nitirat group, whose members include progressive legal specialists.

Mr Thanathorn is a nephew of former transport minister Suriya Jungrungreangkit, a former member of the defunct Thai Rak Thai Party, which became the People's Power Party before transforming into the current Pheu Thai Party.

Mr Thanathorn's interview drew more than 100,000 views and was shared more than 3,000 times, with viewers making comments and asking him questions.

Asked if Mr Thanathorn was attempting to canvass for votes despite the regime's ban on political activity, Mr Wissanu said he was not in a position to judge, but the NCPO is now watching these young bloods closely. The NCPO may have to deal with them if they "cross the line", Mr Wissanu said.

During the interview on Facebook Live, Mr Thanathorn said he was interested in forming a new party to help forge a new future for the country with everyone taking part, to pull the country out of the conflict.

His intentions were to foster democracy with a strong parliamentary system, as well as a trustworthy justice system.

"Someone said my group is no different from Mr Thaksin [Shinawatra]. But I think time will prove otherwise. I cannot prove myself without getting a chance to go to work. Even if Mr Piyabutr and I can form a party, this will still need time. Things cannot be achieved so soon. We'll have to learn together with society,'' Mr Thanathorn said.

He said the election can no longer be delayed and the Pheu Thai Party would likely win the election and form a government if there was no new party to offer itself as an alternative.

"Without a new party as an alternative, the country will collapse. If we don't want society to get to that point, let's join hands and open a new door and walk through it together,'' Mr Thanathorn said.

He said he had seen four coups in his lifetime and the military should now stop meddling with politics. Coups did not benefit the country's future, he said. 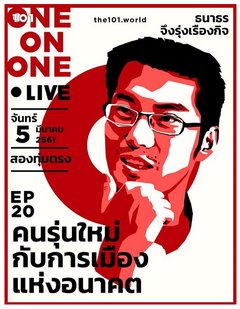 The 1 on 1 interview streamed live Monday on Facebook and drew 100,000 viewers.

Asked how he would shake off his image as Mr Suriya's nephew, Mr Thanathorn said Mr Suriya only meets him a few times a year. His uncle has been ill and receiving medical treatment, he said. He added he did not consult with his uncle when he considered making his foray into politics.

The fourth day of new party registrations was held Wednesday. Only one party, Pattana Paendin, registered, taking the total to 47 new parties registered so far.

Many of the new parties have said they would support Prime Minister Prayut Chan-o-cha returning as a premier after the election.

However, Ravee Matchamadol, leader of a group registered as the New Palang Dhamma Party, insisted the new party would not support Gen Prayut returning as premier.

Former senator Paiboon Nititawan, leader of a pro-Prayut group registered as Prachachon Patiroob (Reform People Party), said Gen Prayut has what it takes to return as prime minister after the poll.

Even though Gen Prayut's overall popularity ratings may have dropped recently, Mr Paiboon said in his opinion Gen Prayut still comes top in terms of honesty and integrity.