The changes being made to 99-year leases given to investors from abroad under the government's flagship economic scheme has rankled some local developers concerned about the improper use of real estate.

Plans to rewrite the former 99-year leases usually awarded to foreign investors are seen as unwanted intrusions by foreigners in the Eastern Economic Corridor.

The much-touted Eastern Economic Corridor (EEC) is aimed at reviving the success of the Eastern Seaboard Development Project from the early 1980s, but one major sticking point drawing polarising opinions is whether to allow foreign companies to have 100% land ownership in real estate.

At present, foreigners are allowed to own condominium units collectively of up to 49% of the total area of a project, while the Lease of Immovable Property for Commercial and Industrial Purposes Act of 1999 grants maximum lease terms of 50 years for industrial or commercial use and 30 years for residential purposes.

The government is adamant that granting full ownership in EEC land would benefit the country, as this would attract more foreign direct investment in the property sector, meaning a boon for Thai real estate developers.

Yet concerns have been raised that there could be a flood of foreign companies, especially Chinese investors, taking control of EEC land plots through investment in the construction of property projects.

Concerns over incentives in the draft EEC Act allowing foreign companies to have 100% land ownership are overblown, as such rights will be allowed only in areas specified by the EEC and for those investing in the industrial sector.

After the draft EEC Act was approved last month, Thai developers expressed concern over incentives for foreign land ownership and a 100% foreign quota in condominium ownership.

The government should limit the land size for condominium projects where 100% foreign ownership is allowed, said Issara Boonyoung, honorary president of the Housing Business Association.

"If the land size for condominium buildings in the EEC is not limited, a plot sized up to 1,000 rai could be developed for a condominium project with only 10 units," Mr Issara said.

He said that if these units are sold to foreigners, they will own a large land plot.

To prevent foreigners from owning or collecting large land plots, plots for condominiums with 100% foreign ownership should be limited to between two and five rai each, Mr Issara said.

According to Section 48 of the EEC Act, those investing in specific industries in the EEC will receive rights for land ownership for doing business, factories, condominiums or buildings for residential purposes.

Those investors will be required to dispose of land or property within one year if they do not start their business in the EEC zone within three years, as the government wants them to have land and property for doing business.

Wittaya Luengsukcharoen, a partner at the international law firm Baker & McKenzie, said there should be no concerns over the draft EEC Act on foreign ownership of land, as the right of foreigners to have 100% ownership of land for industrial business is not new.

"It is similar to an incentive given by the Board of Investment [BoI]," Mr Wittaya said. "The principle of foreign land ownership in the EEC Act is copied from the BoI and the Industrial Estate Authority of Thailand (IEAT), but it will act like a one-stop service to facilitate foreign investors."

Foreign investors are allowed to buy or own a land plot in industrial estates promoted by the BoI and the IEAT. They cannot own or buy a plot by themselves alone in other areas.

"Any issue related to regulations of other government agencies will comply with those regulations," Mr Wittaya said.

For condos with 100% foreign ownership, the EEC Office said future development of industrial estates is likely to include high-rise buildings or factory condominiums, rather than low-rise property, given the limited land plots and evolution of technology.

In other words, a foreign company can buy the remaining units at a condominium project with a 100% foreign quota, or buy the whole project. But that project is required to be located in the EEC's designated zone.

"Some people are concerned that a foreign company with EEC privileges may use a loophole to buy a condominium project and rent it out to tourists," Mr Wittaya said. "But these projects will be situated in EEC designated areas, which are not attractive for tourists."

Moreover, a foreign company cannot buy a plot in the EEC zone for development of a non-industrial project without a joint venture with a Thai partner, as the draft EEC Act only allows foreigners to buy land to develop property for industrial purposes.

Atip Bijanonda, chairman of the Trade Associations Group of Construction and Real Estate Business under the Thai Board of Trade, said that if a plot where a condo project is situated is bought by a foreign company investing in the EEC that exceeds the foreign quota, the company should be banned from changing the land use.

"In the future, the condo may be demolished and the foreign land owner may use a loophole to develop other property on this land," he said. 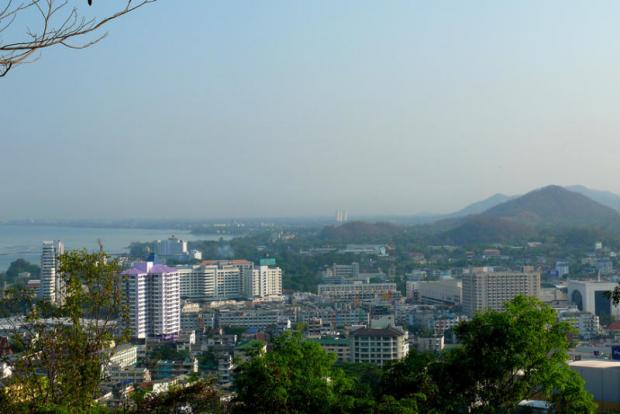 Residential areas in Sri Racha, a district of Chon Buri, one of the three provinces hosting the EEC.

But Mr Atip agrees with 99-year leasehold ownership, as it can help prevent nominees in foreign land ownership. The leasehold period should actually be longer to compete with neighbouring countries that offer more than 99 years, he said.

Suphin Mechuchep, managing director of property consultant JLL Thailand, said relevant government agencies should seek comments and opinions from a diverse group of property companies, be they developers, specialists or consultants, in the planning process to ensure maximum property development potential for the EEC.

"To maximise the potential, the relevant government agencies should synergise with neighbouring areas or existing industrial and commercial hubs," she said.

Ms Suphin said the idea of using one large plot to develop a new EEC city should be feasible in terms of property development, but some additional supporting plans will be required to minimise the downside effects that may follow.

These include concentration of property development and sharp increases in land prices within the EEC, as well as loss of competitiveness in neighbouring areas and other existing industrial hubs.

"If adequate infrastructure, mainly transport networks, is well-planned to ensure convenient connectivity between the EEC and neighbouring areas, there will be opportunities for new property projects with certain uses, such as condominiums or apartments, to be developed in nearby areas outside the EEC," she said.

With a potentially much lower cost of land, these projects may be able to offer more affordable prices and rents, competing with projects of the same use and quality located in the EEC, Ms Suphin said.

According to the EEC Office, five areas designated as special EEC zones will include 6,500 rai near U-tapao airport for the Eastern Airport City and 3,000 rai in Wang Chan Valley, Rayong; 120 rai in Sri Racha, Chon Buri for the EEC of Innovation; 709 rai in Sri Racha for Digital Park Thailand; 1,466 rai in Rayong for Smart Park Industrial Estate; and 1,900 rai in Hemaraj Industrial Estate 4 in Rayong.

Ratchaphum Jongpakdee, general manager of property consultant Colliers International Thailand, suggests that an incentive for foreign ownership should be applied not only in areas specified by the EEC, but in all areas of the three provinces. 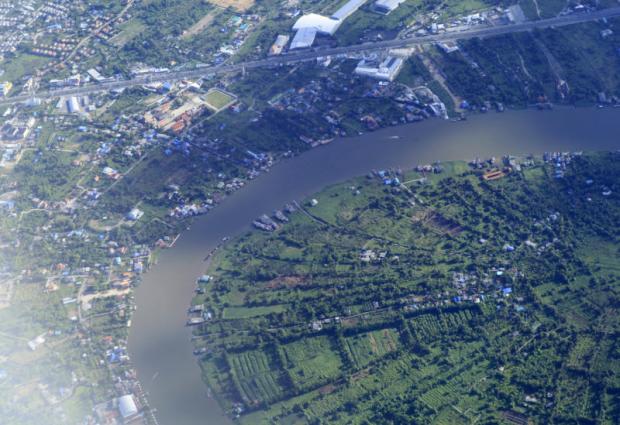 An aerial photo shows part of Chachoengsao, one of the three provinces hosting the EEC. THANARAK KHUNTON

"Since the government initiated the EEC last year, prices of land plots abutting industrial estates have seen month-on-month increases that usually are recorded for year-on-year," he said.

In attractive zones like locations near Assumption College Sriracha, land prices rose to 25-30 million baht per rai from less than 15 million baht in less than six months, Mr Ratchaphum said.

Sharp price rises from January to March this year recorded increases of over 10% per month, compared with a usual rise of 7% per year, he said.

"The government should set a certain period to develop projects on plots after they are acquired to prevent land speculation, which is rampant," Mr Ratchaphum said.

Colliers has received many inquiries from foreign investors interested in the EEC. The most active are Chinese investors because land ownership in China is only leasehold, as opposed to freehold in the EEC area.

"Chinese investors prefer investing alone, as they want to take control," Mr Ratchaphum said. "The Japanese are still looking for a Thai partner for a joint venture, as it is more secure. For investors from Hong Kong, yield is key."

Chinese investors want to invest in mass condo projects on a large scale, he said, adding that those from Hong Kong are looking to develop serviced apartments, hotels and luxury condos, while the Japanese prefer housing and condo development. 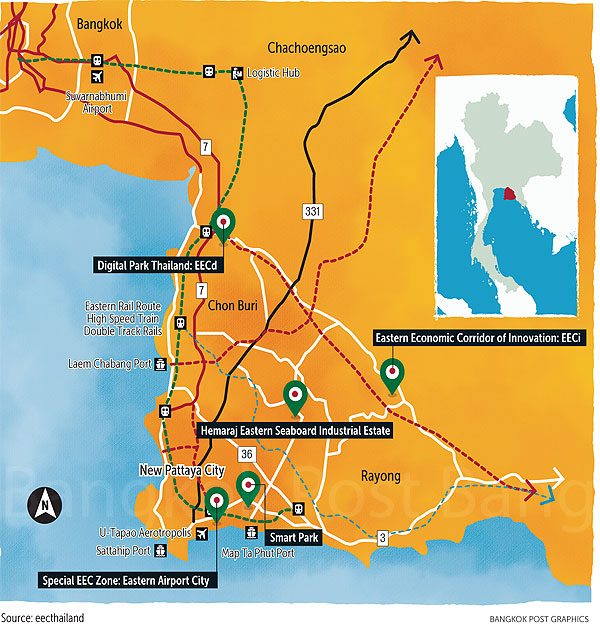