Army commander Chalermchai Sitthisad warned Thammasat law lecturer and Nitirat group leader Worachet Pakeerut on Tuesday to keep his thoughts to himself, ruling out fears of violence as suggested by the academic if an outsider prime minister is installed.

"Everything is following the roadmap. Don't think too far ahead. Let's proceed to an election and solve the problems along the way. Don't think about an outsider prime minister just yet. It will only drive people crazy and stop us moving forward," he said.

Gen Chalermchai, who is also secretary-general of the National Council for Peace and Order (NCPO), was reacting to Mr Worachet's warning that the country should have learnt its lesson after the bloodshed of Black May in 1992.

The academic's concerns came amid reports that some political groups, as well as a majority of respondents in a recent poll, would support Prime Minister Prayut Chan-o-cha, who is also the NCPO leader, to return to the role after an election.

The Black May incident occurred in 1992 when street protests led to a military crackdown after Gen Suchinda Kraprayoon, then army chief and a key coup leader, was chosen by parliament to become the country's 19th prime minister.

Asked about calls by new political parties for the military should be downsized after an election, Gen Chalermchai said the military has already undertaken several reforms but is willing to adapt to meet Thailand's needs.

He also rejected concerns that the National Legislative Assembly's decision to submit an organic bill on the selection of senators to the Constitutional Court for a ruling would affect the roadmap, saying the general election should take place in February next year.

Gen Chlaermchai, who is also an NLA member, said he voted to pass both the election laws and expressed confidence that both pieces of legislation would not run into problems with the constitution.

In a separate development, Gen Prayut warned that elections could be pushed back if political parties failed to show up for talks scheduled for June. 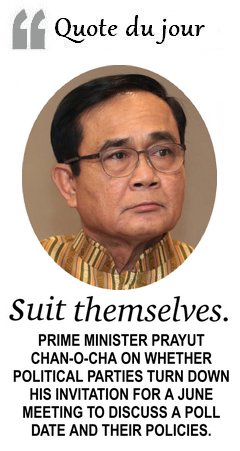 He said the political parties must be asked about their plans for national development.

"If they don't show up, an election date can't be set," he said.

Asked if this would be seen as interference in the affairs of those political parties, he said they would not be discussing party platforms or manifestos.

"They are welcome to attend. I won't break a promise. The election will take place and I'll set the date myself [if political parties refuse to take part]," he said.

Late last month, Gen Prayut said he would call a meeting with political parties to determine the election timeframe and encourage them to make a public commitment on a national unity strategy.

Meanwhile, Korkaew Pikulthong, a key figure in the red-shirt United Front for Democracy against Dictatorship, said no political parties would turn up if they were asked to discuss their platforms.

"Some might be willing to show up if they are provided with an official agenda ahead of time," he said.