A group of students tussled with security and held up a sign saying 'Chula loves Uncle Tu [the dictator]' when the prime minister (inset) was speaking to reporters before a speech at Chulalongkorn University. The sign was torn in the scuffle with security. (Photos by Wichan Charoenkiatpakul)

Prime Minister Gen Prayut Chan-o-cha has hinted that he might accept an invitation to be on a political party's list of nominees to become prime minister after an election if he feels there is enough support behind him.

He also made it clear that he has not yet made a decision about his political future.

"I was asked by several people which political party I will give my support to in the election, but I have not yet discussed the matter with any of them.

"I'm not sure yet whether I will accept [parties' invitations to be a prime ministerial candidate]. What would happen if I accepted but no one chose me? So I will accept only if all the members [agree to] choose me so that I can make changes," Gen Prayut told reporters on the sidelines of an event to launch a water well development project in Bang Sue Monday.

Political sources believe the regime has come up with a fresh strategy to smooth the path for Gen Prayut to carry on in office through political parties' lists of candidates for prime minister rather than hoping he will be chosen as an "outsider prime minister".

The term outsider prime minister refers to a nominee not on the lists of political parties and who is voted in by a majority in both the House and Senate if they fail to choose one of the candidates on the lists.

In a separate interview in front of Siam Square One building Monday, Gen Prayut declined to shed light on his political future when reporters asked him about Deputy Prime Minister Somkid Jatusripitak's recent announcement supporting him to carry on as prime minister after the election, which is expected next February.

"I thank him but I haven't made a decision whether to accept any of the parties' invitations yet. We need to carefully think about the issue together," he said.

While he was giving the interview, a group of Chulalongkorn University (CU) students raised a banner behind him which read "Chula loves Lung Tu [the dictator]".

Security officials immediately snatched the banner away and attempted to move the students out of the area.

"Leave them. Don't hurt them. If they don't understand me, let them be," Gen Prayut told his guards when he spotted them.

"Great, how clever you are. When there's damage to the country, please also show up as well," he said to the students during the incident.

Gen Prayut was invited by the university to give a speech on CU's role in the nation's future. He visited the "Siam Innovation District" event at Siam Square after he gave the speech at CU's auditorium.

In his speech, he denied criticism that he had formulated the 20-year national strategy as a means to retain power. 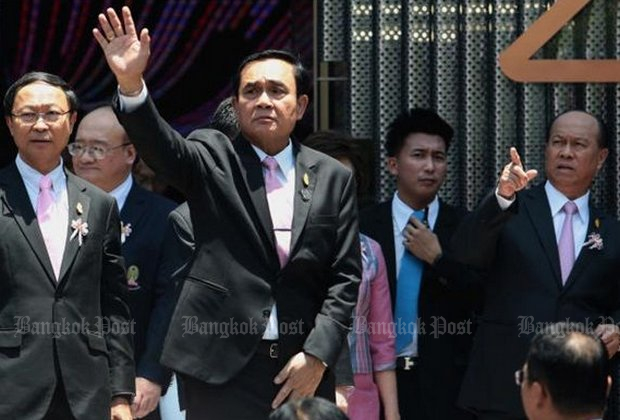 Officials including Interior Minister Gen Anupong Paojinda (right) appear concerned over the protest, but the prime minister signals to security to stop fighting with the students - and then sarcastically 'welcomed' them.

He said the 20-year national strategy can be revised every five years depending on the direction the nation is heading in. Of the criticism, he said: "I want to ask them which direction are they going to lead this country in?"

Earlier in the morning, Sophomore activist Netiwit Chotiphatphaisal, who wore a gas mask to the event to protect himself from the "pollution" of Gen Prayut's words, said he was prevented from reaching the auditorium's lower level while the prime minister spoke.

Instead, he said he was made by university staff to sit far from Gen Prayut on the upper level.

In his speech on the future roles of CU, at the morning forum, Gen Prayut praised CU for playing a leading role in moving his "Thailand 4.0" strategy forward.

He stated that under the strategy, an economic model aimed at pushing the country into a higher-income bracket, universities have a key role to play in research and human resource development.

They should also work out a roadmap for the development of knowledge on the S-Curve industries mentioned in the policy.

"CU is one of the country's spearheads in driving the 4.0 vision. It has already prepared and adjusted itself by creating programmes in AI, Robotics and Biomedical Engineering which are crucial fields in the New S-Curve industries of Thailand," he said.

The prime minister said that Artificial Intelligence (AI), big data and the Internet of Things (IoT) are increasingly being used in production and management processes.

The absence of a long-term strategy to manage the transition may leave many university graduates without the skills to prosper in the modern climate.