Sonthaya Kunplome, eldest son of Somchai 'Kamnan Poh' is appointed adviser on political affairs to the prime minister, and his younger brother Itthiphol, a former Pattaya mayor, as an assistant to the tourism and sports minister. (File photo)

Two brothers of the Kunplome clan have been appointed political officials, with the eldest son of 'Kamnan Poh' to serve as adviser to the prime minister and a younger one becoming an assistant to a cabinet minister.

The cabinet on Tuesday approved the appointments of Sonthaya Kunplome as adviser on poltical affairs to the prime minister, and Sonthaya’s younger brother Itthiphol as an assistant to the tourism and sports minister.

Prime Minister Prayut Chan-o-cha endorsed the appointments, proposed by the Secretariat of the Prime Minister, on Tuesday, Thai media reported.

Mr Sonthaya, 55, leader of the Palang Chon Party and former tourism and sports minister, is the eldest son of Somchai Kunplome, alias Kamnan Poh, or the “Godfather of Chon Buri’’, who wielded considerable influence in this eastern province. 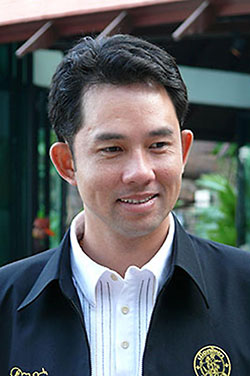 Mr Itthiphol, 45, a former Pattaya mayor, is the fourth child of Mr Somchai.

Somchai, 80, was freed from jail on Dec 14 last year after he was deemed to have met special criteria for early release.

Somchai, one of the most powerful figures in Chon Buri, went on the run in 2006 for seven years before being arrested in January 2013 by a team of police commandos as he was travelling in a vehicle in eastern Bangkok.

He was later sentenced by the Supreme Court to 25 years in prison for hiring a gunman to murder Prayoon Sitthichoke, known as Kamnan Yoon, at a wedding reception in March 2003. He was also sentenced to three years and four months in jail for abuse of power in connection with a land plot purchase.

In March 2015 his sentence was cut by five years and eight months on the occasion of HRH Princess Maha Chakri Sirindhorn's 60th birthday. He was originally scheduled for release in September 2035.