Thousands of people rallied over a wide area in Chiang Mai's old city to demand the regime teach down buildings and houses built for judicial employees in the foothills of Doi Suthep. Photo shows a crowd at the Chiang Mai City Hall and the Monument of the Three Kings (upper right). (FB/DoiSuthepMountain)

CHIANG MAI: About 5,000 people marched through Chiang Mai municipality Sunday to protest against the housing and office project for judges and judicial officials at the foot of Doi Suthep, demanding the housing be demolished and gave the premier a one-week ultimatum.

The rally is seen to be the biggest demonstration against authorities since the military coup in 2014.

The rally-goers, which include those from 47 civic networks and Chiang Mai residents, demand Prime Minister Prayut Chan-o-cha order the demolition of the constructions and restore the forest.

They also called on the premier to make a decision in response to their demand within a week.

The marchers in the early morning gathered at Tha Phae Gate, where 300 police were deployed to ensure security and ease road traffic around the area.

Many participants were seen to have green ribbons tied to their wrists to express their disapproval of the project. 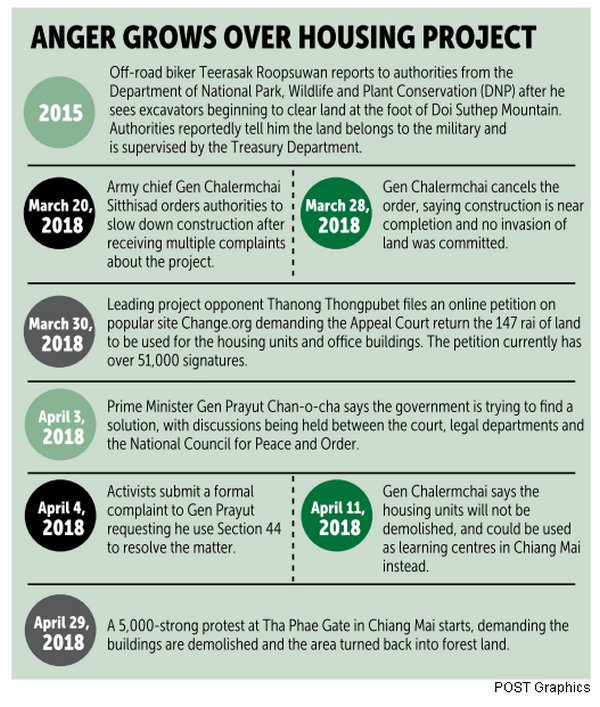 The rally's leading figures stressed their movement is not related with any political groups, but is merely aimed at expressing their determination to have the structures razed.

Teerasak Roopsuwan, a co-leader of the rally, said Doi Suthep has been a sacred mountain for Chiang Mai people since the Lanna Kingdom 772 years ago.

It is also a place where Buddha's relics are kept and religious ceremonies held to worship them, adding Doi Suthep is the treasure of Chiang Mai people, he said.

"They have the full rights to safeguard Doi Suthep along with forest which is part of this sacred mountain."

The Administrative Office of Appeal Region 5 earlier said the project's site is located on Treasury Department land in tambon Don Kaew in Mae Rim district that it is not part of the national park.

Raw video footage shot from a drone shows the demonstration approaching Chiang Mai City Hall and the statue of the Monument of the Three Kings of the Lanna period, symbol of the North.

Mr Teerasak, responding to that, said the site was once on land which formed Doi Suthep forest as a whole.

The razing of the trees in the area has caused an eyesore and violated the rights of Chiang Mai people, he said, adding: "Public opinions have never been heeded since the project was initiated."

"What we only want is to demolish these disgraceful structures and restore the forest," Mr Teerasak said.

"We want to announce that we will stand firmly to fight and to keep our determination," the activist said.

"We want the full forest at Doi Suthep. We do not want flawed forest." 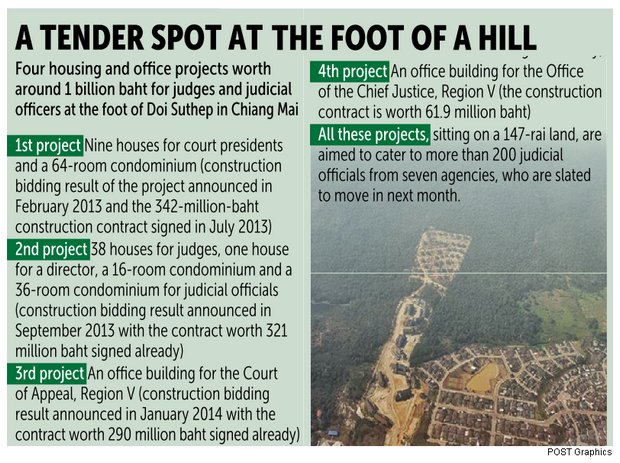 The rally-goers marched along Ratchadamnoen Road and reached the Three Kings Monument about 9.15am when a religious rite was conducted.

During the rally, many people on both sides of the road were seen to deliver drinks to the demonstrators and showed placards supporting the movement. About 100 students of Chiang Mai Rajabhat University also took part in the rally.

The students said the project should not have come to light in the first place.

After reaching the monument, Mr Teerasak said the group would give the prime minister one week to make a decision on the issue. "If he has to set up a committee to look into the issue, just make it clear since Chiang Mai people do not want to wait any longer. The prime minister must hurry to make a decision or the problem will just escalate," he said.

A local woman, who gave her name only as Nual, said she had faith in Wat Phra That Doi Suthep and it is unimaginable for her to see the housing project at the location. She said she wants the structures to be razed.

The rally-goers later dispersed peacefully after the religious rites at the monument finished.

Meanwhile, most people believed it is inappropriate to build a housing project for judge officials there, according to an opinion poll conducted by the National Institute of Development Administration, better known as the Nida Poll.

The pollster surveyed 1,250 people across the country from April 21-23.

According to the poll, 85.2% of the respondents said they believed the project was unsuitable since it damages forest, nature and ecosystem, while 14.56% said it was appropriate as the property sits on lawful land.

Asked whether they were aware that it is legal to build the housing project at the site, 81.12% said they were not, while 15.56% said they had known it was legal.

According to the poll, 53.84% of the respondents said they agreed the structures there must be razed, but 43.68% disagreed, saying it would be a waste of money to pull them down now.