Somyot Prueksakasemsuk gestures to his supporters before going home after his release from Bangkok Remand Prison on Monday morning. (Photo by Pornprom Satrabhaya)

Somyot Prueksakasemsuk was released on Monday after serving seven years in jail for lese majeste and defamation.

The former editor of the now-defunct Voice of Taksin magazine walked out of Bangkok Remand Prison to freedom at 6am, with his family and friends waiting to greet him.

He hugged his daughter and son and acknowledged other well-wishers before leaving the prison compound in his family's car.

"I am a bit disappointed that I came out and did not see democracy, but instead a place controlled by  NCPO orders," Voice TV quoted him as saying, a reference to the junta's National Council for Peace and Order.

He vowed to continue his calls for freedom and justice, and admitted the hardship of being behind bars. His detention had at least put Thailand in international focus on the problems of politics and freedom, he added. (continues below) 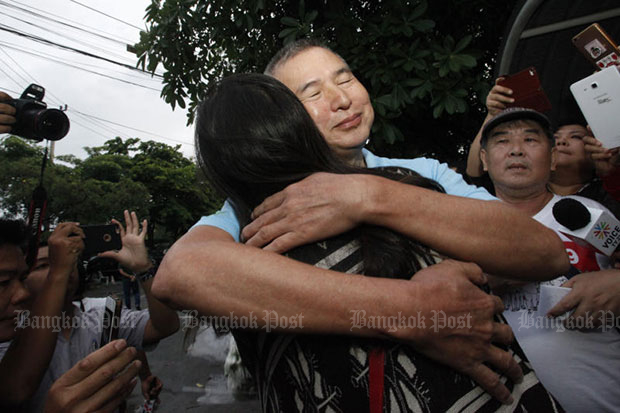 He was accused of violating Section 112 of the Criminal Code, also known as the lese majeste law, by publishing two articles in 2010 that were deemed insulting to the royal family. He was not the writer of the articles.

The Criminal Court in January 2013 sentenced Somyot to 10 years in prison -- five years each on two charges. The Supreme Court on Feb 23, 2017 reduced the penalties to six years in total.

However, he was also convicted of defaming former deputy secretary-general of the Council for National Security Gen Saprang Kanlayanamitr, which added another one-year jail term.

Somyot had sought bail 16 times, but all were rejected. He was a campaigner for better rights and welfare for workers before leading the anti-coup June 24 group, which was allied to the red-shirt United Front for Democracy against Dictatorship.

BOGOTA - At least four people were killed and another 30 seriously injured on Sunday when the grandstand at a bullring in Colombia collapsed during a popular event at which members of the public face off with small bulls, officials said.

LONDON: It's been nine years since Sergiy Stakhovsky stunned Roger Federer at Wimbledon in a Centre Court seismic shock.

Experts warned Thailand will lose many of its unique freshwater species during the government's crusade against water issues.