Bangkok police block off a street to contain a peaceful protest by members of the P-Move land rights advocacy group. The police did not attack the poor people on Wednesday. (Photos by Chanat Katanyu)

The leaders were travelling with other P-Move members in a bus when they were stopped at a checkpoint in Mae Tha district of Lamphun on Tuesday evening. They were heading Bangkok to join the P-Move rally there.

They were then taken to the district office and the bus was left at the checkpoint, Ms Bandita said.

Another bus with P-Move members on board from neighbouring Chiang Mai was intercepted at a checkpoint in the province. Authorities told the members the bus had to stay at the checkpoint as well.

There were altogether 108 P-Move members in the two buses, including the three leaders.

After the detentions, the activists on the two buses travelled to the Mae Tha district office and demanded to see the three leaders held there overnight.

At 6pm yesterday, the three leaders were freed from detention and the soldiers escorted them home, Ms Bandita said. However, it was unclear what conversations the authorities had with the leaders.

Meanwhile, the P-Move and its ally the Federation of the Northern Farmers issued an open letter deploring the interceptions by security authorities for stifling the members' rights to peaceful assembly.

The incident has also prompted the UN Human Rights Office for Southeast Asia to release a statement expressing concern about the interceptions.

According to the joint letter, the federation said it had formally requested to attend the rally in Bangkok as required by the Public Assembly Act.

The officials had no right to prevent them from joining the protest in Bangkok. They were duty-bound to facilitate their travel and ensure a safe journey, it said.

The P-Move and the federation called on Prime Minister Prayut Chan-o-cha to order authorities to stop intimidating or hindering them. They also asked the National Human Rights Commission representatives to observe their rally in Bangkok. 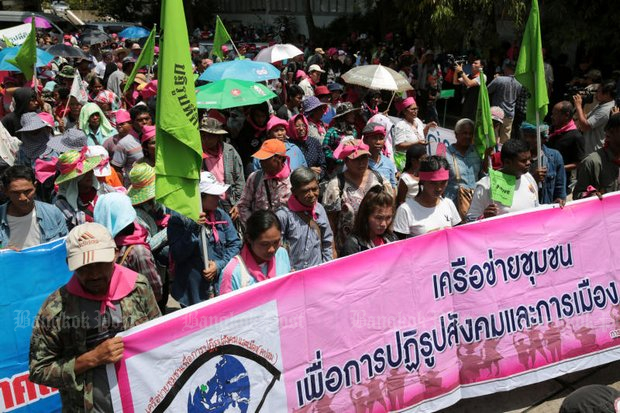 About 300 P-Move protesters headed towards Government House to call for a permanent solution to land problems affecting the poor. They have refused to leave and are camped out on the streets, vowing to keep protesting until their demands are met.

In Bangkok, P-Move protesters camped out outside the Interior Ministry last night after presenting the government with their demands. The group has vowed to continue the protest for at least seven days.

PM's Office Minister Suwaphan Tanyuvardhana met the protesters yesterday and promised to convey their demands for fairer distribution of land and a permanent solution to longstanding land problems in many parts of the country to the mobile cabinet meeting in Buri Ram on May 8.

Mr Suwaphan told protesters they should not stay overnight on the streets of Bangkok and that they should return home and wait for an answer from the cabinet.

However, The P-Move members insisted they would stay put.