Sudarat hits back at NCPO over court threats
Thailand
Politics

Sudarat hits back at NCPO over court threats

Pheu Thai leader Sudarat Keyuraphan on Sunday reprimanded the National Council for Peace and Order (NCPO) for pressing charges against her party.

Khunying Sudarat said the junta was misusing the law to protect its power and silence its critics.

She referred to Section 116 of the Criminal Code - covering sedition - which was cited by the NCPO in its request to the Crime Suppression Division to press charges against eight party members on Thursday.

Other charges included breaching the Computer Crime Act and violating a ban on political activities.

Pheu Thai has vowed to fight back by counter-suing the NCPO.

The latest feud between Pheu Thai and the NCPO erupted after the party highlighted the shortcomings of the four-year-old regime, including its failure to restore democracy, bring about reconciliation, tackle corruption and stimulate the economy.

It posted its criticisms on the party website under the headline "Four years of failure of the government and NCPO."

The publication came shortly before the fourth anniversary of the coup on May 22.

The regime's decision to press charges against Pheu Thai could ultimately lead to the party being disbanded.

Khunying Sudarat on Sunday brushed off the threat, saying Pheu Thai had examined the situation and the loyalty of supporters had not been eroded.

The party was set up by former telecom tycoon Thaksin Shinawatra as Thai Rak Thai before it was banned and then rebranded, first as People's Power and now as Pheu Thai.

Khunying Sudarat is widely tipped to be nominated as Pheu Thai's candidate for prime minister in the general election.

Pheu Thai and its predecessors have won every election since Thaksin assumed the leadership of Thai Rak Thai. The most significant challenge it is likely to face in the next election is the possibility of an unelected 'outsider' prime minister receiving the backing of other parties and appointed senators.

"Anything is possible..when the people want change," she tweeted above a picture of Dr Mahathir on her @KhunYingNoi account two days later. 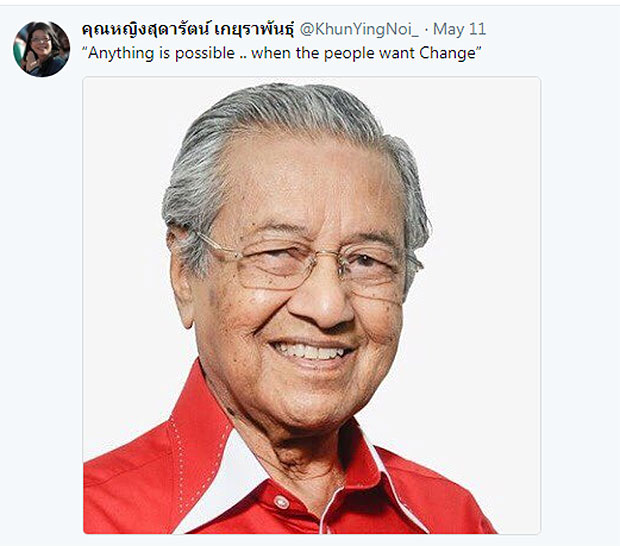