Rangsiman Rome shouts "down with dictatorship, long live democracy" as he is taken into the Criminal Court on Thursday. (Photo by Apichart Jinakul)

The Criminal Court allowed conditional bail for 15 pro-election activists on Thursday after approving a police request to detain them pending further investigation and questioning of witnesses.

The court approved bail on condition they refrain from taking part in any political activities during their  temporary release.

Lawyer Kritsadang Nutcharas posted 100,000 baht in cash as a guarantee for each accused.

He said before the hearing he would request bail on the grounds they had no intention to flee or avoid reporting to police.

The 15 leading campaigners for a  general election this year, not later, were taken to the court from Phaya Thai and Din Daeng police stations, where they were being held, on Thursday and police applied for approval to detain them for the first 12-day period.

Investigators said the case report was not complete with 10 more witnesses still to be called in to give their accounts of Tuesday's demonstration. Police were also waiting for verification of the fingerprints of the suspects.

The court approved the request and the suspects were then held at the court until a decision was made to allow them bail.

The key members of the Democracy Restoration Group were arrested on Tuesday after leading about 2,000 demonstrators at Thammasat University Tha Prachan campus in demanding the government hold elections in November, as Prime Minister Prayut Chan-o-cha had earlier promised.

They each face six counts including sedition, the most serious charge, which carries a maximum prison term of seven years.

"Down the dictatorship. Long live democracy," announced Rangsiman Rome, a group leader, when he was whisked away by police into the courthouse.

They were greeted by supporters waiting outside the courthouse. Some red-shirt members, including Nattawuat Saikuar, later came to show them support. 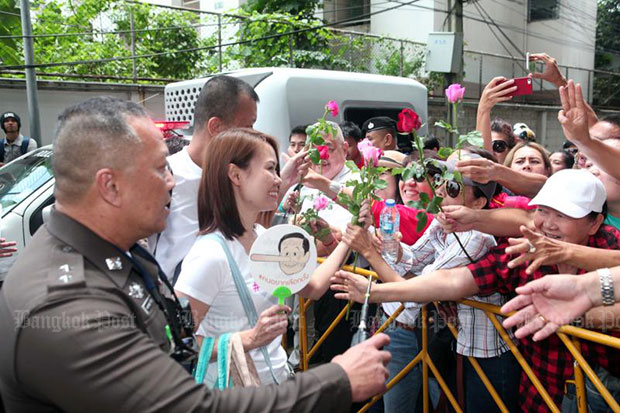 Supporters greet the 15 pro-election activists as they are taken into the Criminal Couirt for a hearing on Thursday.  They were allowed conditional bail while police continue to compile the cases against them. (Photo by Apichart Jinakul)