A country swept up in the statistics
Thailand
Politics

A country swept up in the statistics

As Thailand's GDP growth hums along, the numbers fail to capture the nation's persistent inequality and grinding poverty

Prasarn Trairatvorakul: The former governor of the Bank of Thailand fingers three issues that prevent Thailand from meeting its own economic potential. (File photo)

On the surface, Thailand's economic growth story of the past few years has been putting jubilant smiles on officials' faces. But beneath the ostensible delight are hidden structural time bombs in the making, with the clocks ticking relentlessly.

These structural problems led to his diagnosis of Thailand as a "sick patient", Mr Prasarn said, adding that the government has been trying to administer several medications, but to no avail.

As in the case of Thailand and elsewhere, GDP growth does not always foster social equality.

"Social inequality is the root cause of conflicts domestically and globally," Mr Prasarn said. "History has constantly shown that whenever people's livelihood is drastically different, this increases the risk of a stand-off to fight over resources at every level."

With the country's future at risk of crumbling, there is a need for antidotes to help sustain or even improve Thailand's economic prospects -- or there will be little to smile about in the Land of Smiles.

Credit Suisse's Global Wealth Report 2016 identified the most unequal countries in the world, with Russia taking the top spot, followed by India and Thailand.

Despite economic growth and greater accumulated wealth, a Gini coefficient ranging from 0.45 to 0.53 shows that income inequality has remained stubbornly high since the 1980s.

Some 10% of Thais, or roughly 7 million people, live below the poverty line, while the 10% with the highest and lowest income have an income disparity of 22 times, Mr Prasarn said. 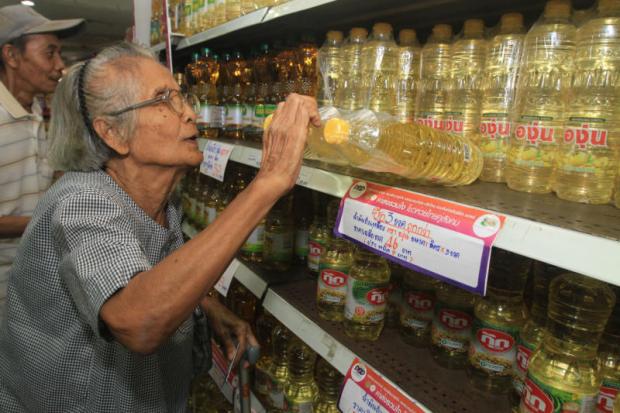 Low-income earners can use welfare smartcards to pay for food and other necessities under the government's e-payment system. Somchai Poomlard

He added that 75% of Thais lack their own land, while 600,000 Thai children are held out of the education system because of a lack of monetary support.

But such a notion seems inapplicable in Thailand, as evidenced by the feeble inheritance tax and uncertainty surrounding the proposed land and buildings tax, Mr Somchai said.

"The social structure in Thailand's society does not facilitate tax reform because the rich have the ultimate authority," he said. "Therefore whenever they issue a law, such law tends to become a paper tiger."

Higher tax based on an individual's asset base and introduction of a capital gains tax are some of the ideal tax reform methods, Mr Somchai said.

Fiscal policy can be used to reduce social inequality to ensure that state revenue delivers more benefits to the poor than to the rich, he said.

Besides covering general healthcare, social security should cover cases of mortality and pregnancy, he said, while a system designed to support education for poor children should be enacted.

The problems highlighted by Mr Prasarn and Mr Somchai indicate that the benefits from GDP growth have been concentrated in small groups of people and not distributed widely enough to reduce inequality in the country, said Kampon Adireksombat, senior vice-president of Kasikorn Securities.

"I think we need to make it a top priority to address inequality of opportunity, rather than inequality of income," Mr Kampon said. "And I believe a quality education is the key success factor to better opportunities.

"The private sector definitely has a role to play in fixing inequality issues. Again, I think we should focus on inequality of opportunity. I think meritocracy, transparency and accountability in our public sector would facilitate rising productivity and economic growth."

Corruption, which has been entrenched in Thailand, is also a problem, Mr Somchai pointed out. A worker cleans the street in Yaowarat, Bangkok's Chinatown. Thailand has some of the world's starkest wealth inequality. Apichart Jinakul

The incumbent government has neglected to address the problem thoroughly, he said, noting that state agencies' authority has actually increased, which could perpetuate corrupt practices and hinder transparency.

"The longer the government stays in power, the greater corruption there is," said a hospital officer named Panit. "Corruption has been a long-rooted problem, and it is very difficult to solve this."

During the decade before the Asian financial crisis erupted in 1997, Thailand's annual GDP growth averaged 9%-plus. In the two decades since the crisis, however, economic growth has averaged 4% a year, suggesting weaker performance and ebbing competitiveness.

Compounding the problem is the fact that the nation is experiencing a greying demography.

Thailand ranks third among the most rapidly ageing populations in the world, according to HelpAge International. The number of people aged 60 and over in Thailand stands at about 8 million, accounting for 13% of the population.

By 2040, Thailand's ageing population is expected to increase to 17 million, accounting for 25% of the population. This means that one of every four Thais will be a senior citizen. 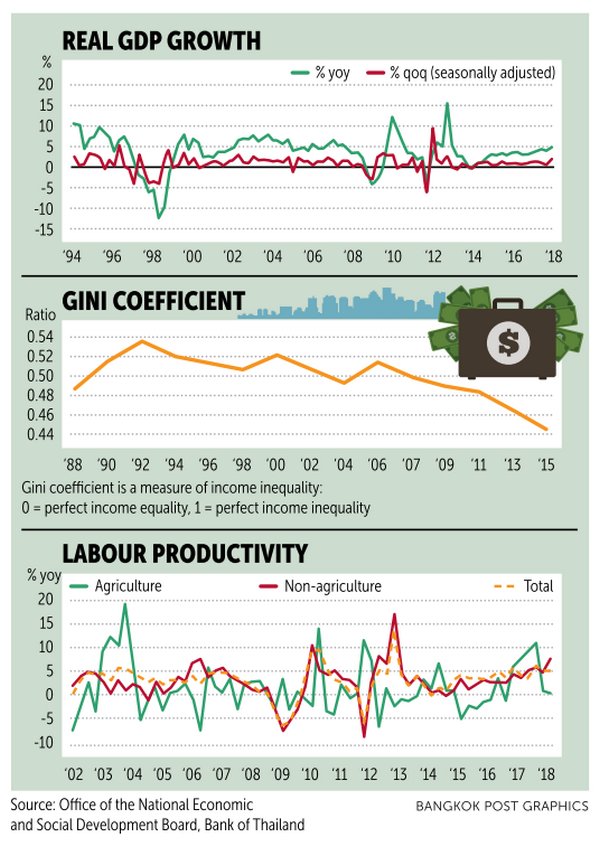 Global consultancy McKinsey estimates that 400 million people, or about 15% of the global workforce, will be displaced by automation during 2016-30. New professions will emerge, such as data scientist and talent acquisition specialist.

Mr Somchai said Thailand must urgently prepare for the age of automation through training programmes for the services sector and by offering training for the elderly and low-income earners on how to operate sophisticated automated machines.

"Technology is a double-edged sword," he said. "It makes elders lose jobs, but it could also provide them with skills to operate robotic machines."

REFORMS FOR THE FUTURE

While some might think all hope is lost, business leaders and government officials see light at the end of the tunnel via state-sponsored measures.

The Federation of Thai Industries expects the government's budget disbursement in provincial areas and local villages to boost local economies and have a positive effect on people's income, said FTI chairman Suphan Mongkolsuthree.

"It is starting slowly," he said. "Everything must take time."

Another positive factor supporting Thailand's economic growth is increasing agricultural prices, including those for palm oil, rice and rubber, which will contribute to higher farm household income, Mr Suphan said.

The FTI, however, has been informed that some companies involved in government projects have been reaping benefits by controlling the supply chains, Mr Suphan said, adding that smaller businesses are harmed as a result of such domination.

"The FTI has heard about this, and large businesses are in the process of providing budget and more work for local businesses," he said. "However, we must understand that these large businesses have higher potential to be awarded with major projects with big budget from the government."

Deputy Prime Minister Somkid Jatusripitak said that what the government has been trying to do over the last few years is narrow income disparity, which is quite difficult and time-consuming because of structural problems.

Projects that have already been implemented include the Pracha Rat (People's State) public-private collaborative scheme; the state welfare and subsidy programme, now in its second phase; farm sector reforms; legal reforms; and development of SMEs and startups.

As a new short-term aid measure, the government in August is scheduled to introduce debt suspension and a value-added tax payback scheme for low-income earners, according to Mr Somkid.

In the medium term, the government is allocating a further 100 billion baht from the mid-year budget to farm sector reforms, mainly aimed at encouraging rice farmers to grow other cash crops in lieu of off-season rice farming.

For the longer term, the government is committed to rejigging outdated laws and developing Thai SMEs and startups to create revenue for small-scale entrepreneurs.

"The incumbent government is hopeful that projects which have been initiated and implemented will be continued by the new government," Mr Somkid said. "These projects can really tackle the country's income disparity in the long run."

Prime Minister's Office Minister Kobsak Pootrakool said Thailand's key revenue stemmed from farming and the agro-industrial sector three decades ago, but nowadays the farm sector, in which about 20 million people are engaged, is in trouble due to low farm prices.

More importantly, this is a structural problem for Thailand's farm sector, Mr Kobsak said, noting that previous governments of the past 60 years tackled the problem on a superficial basis through short-term state assistance such as price intervention and price pledging.

"What this government has implemented is to strengthen the farm sector from its foundation," he said. "A key part of the effort is to enact a law to build up the local economy, such as the long-awaited Community Forest Act that allows forest dwellers to live in forests and even make use of resources by collecting forest products and running eco-friendly tourism, while the state units offer R&D and marketing development.