Two key organic laws were published in the Royal Gazette on Wednesday, paving the way for an election to be held by May. (Bangkok Post photo)

Two key organic laws on the election of MPs and selection of senators have received royal approval and were published in the Royal Gazette, paving the way for an election to take place by May next year.

The publication of the two laws was announced on Wednesday after receiving royal endorsement. They will take effect after 90 days.

Once the laws take effect in December, the constitution requires an election to be held within 150 days.

That means the Election Commission (EC) is obliged to hold the election by May next year.

Based on the provisional clauses of the senator selection law, the EC is responsible for an intra-group election of 50 senators while the majority of the remaining 200 senators will be hand-picked by the National Council for Peace and Order (NCPO). Several seats are reserved for military leaders.

The constitution stipulates the country will have 500 MPs - the winners in 350 constituencies, plus 150 party-list MPs allocated on the basis of proportional representation.

EC secretary-general Jarungvith Phumma said last week the selection process of 50 senators will begin after the organic law was royally endorsed and published in the Royal Gazette.

Prime Minister Prayut Chan-o-cha said last month that the general election had been tentatively set for Feb 24 but he left room for a later date.

The NCPO will soon lift a ban on political activities to give parties time to prepare fielding candidates for the election. 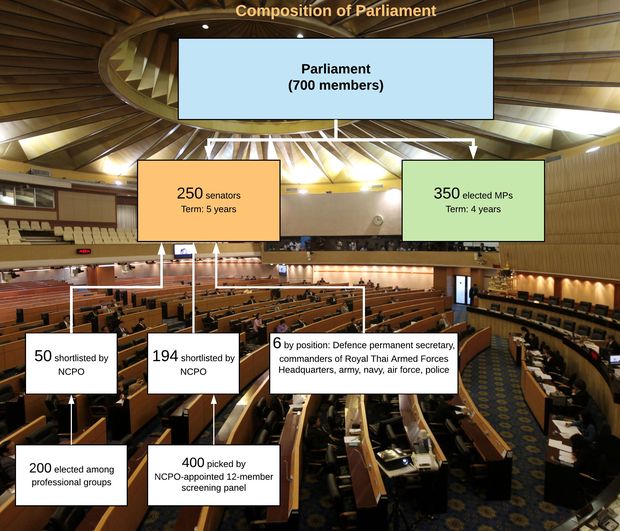