Regime adds another fresh face ahead of election

Buddhipongse Punnakanta meets the Government House press corps after his appointment to the staff of the PM's Office on Tuesday. (Post Today photo)

The cabinet's appointment of Buddhipongse Punnakanta as the prime minister's deputy secretary-general for political affairs is reinforcing speculation that the regime is moving to bolster its ranks with fresh faces ahead of the general election.

Mr Buddhipongse, a core figure in the now-dissolved People's Democratic Reform Committee (PDRC), is the second leading member of the street protest movement and Democrat Party member lured into the government's fold.

The move was seen at that time by some party members as government interference in local administration as Bangkok governor Aswin Kwanmuang was installed by the regime, and getting Pol Gen Aswin to position Mr Sakoltee in an important political post to prepare him for a place in a pro-regime party in the future.

Next in line to be courted is Natthapol Theepsuwan, also a core member of the PDRC movement and a former Democrat MP, according to a political source.

Mr Natthapol is tipped to serve as the director of the Phalang Pracharat Party, believed to have been set up to back Prime Minister Prayut Chan-o-cha if he bids to reclaim the premiership.

The pro-regime political party has yet to be endorsed by the Election Commission (EC). 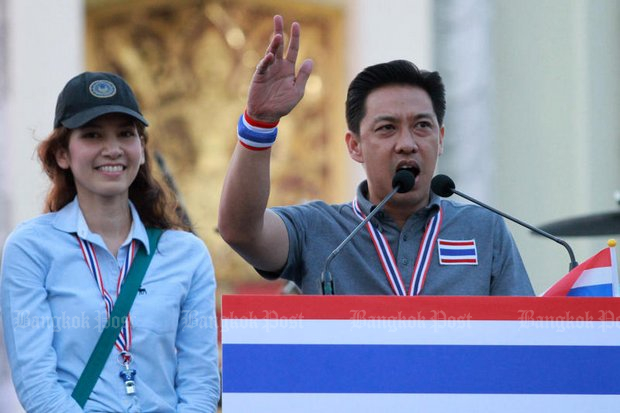 According to a source close to the pro-regime party, the latest addition of Mr Buddhipongse to the Prayut cabinet and the possible defection of Mr Natthapol indicate a major jump to maintain a fresh image by the regime.

The recruitment of Mr Buddhipongse comes as the regime faces criticism of pulling various members from political parties to help shore up support for Gen Prayut's return to power. However, several of the defectors are seen as B-listers in terms of their chances of winning MP seats.

The trio projects an image of the young-generation politicians with political expertise, even though they face serious charges including insurrection in connection with the anti-Yingluck Shinawatra demonstrations from 2013-2014.

They are among the key PDRC leaders indicted over their roles in the "Bangkok Shutdown" demonstrations to oust the Yingluck Shinawatra government in early 2014.

The regime's siphoning of the three former Democrats is believed to have little or zero impact on the Democrats but it will deal a serious blow to the Ruamphalang Prachachartthai Party or Action Coalition for Thailand (ACT) co-founded by former PDRC protest leader Suthep Thaugsuban.

The Democrats have a strong political base in Bangkok and any defections are unlikely to leave the party struggling to find candidates to fill the voids in their constituencies.

In the wake of speculation that his appointment has political implications, Mr Buddhipongse said he cut no political deal with the government when accepting the job.

"Don't link the issue to the election or political parties. I've accepted the post without any political strings attached. It's all about work. The government is in its final leg and has a lot of work to do," he said.

According to Mr Buddhipongse, who has been with the Democrats for 18 years, he has parted ways with the party without any hard feelings and he is qualified to serve as the prime minister's deputy secretary-general until his trial in the insurrection case is over. The witness hearings are scheduled for next year.

He said his decision to join the government has nothing to do with Mr Sakoltee and it does not present any conflict of ideologies or principle.

The PDRC movement's goal is to push for national reforms, which are not against the regime's agenda, he said.

Mr Buddhipongse said it was not the first time he was approached by the government with a job offer and that he declined the first time because he was not ready for it.

The deputy secretary-general post was offered by Gen Prayut himself in a phone conversation with Mr Buddhipongse, the latter said.

"It's too early to say if I'll return to work with the Democrats. The political ban has not been lifted yet. And I haven't decided if I will join a [pro-regime] party," he said.

Deputy Prime Minister Wissanu Krea-ngam said yesterday Mr Buddhipongse does not have to resign from the post if and when he becomes an MP candidate in the next election.

However, as the premier's deputy secretary-general, Mr Buddhipongse would have to comply with certain rules for political office holders, apart from election campaign regulations, according to the deputy prime minister.

Mr Buddhipongse was appointed by the cabinet when it gathered for a meeting on Tuesday.