Prime Minister Prayut Chan-o-cha is leading the cabinet on another up-country 'mobile cabinet meeting', with spokesman denying any connection with political campaigning. (Photos via Government House)

Prime Minister Prayut Chan-o-cha pledged Monday to develop the northeastern province of Loei with new projects aimed at enhancing its capacity in a range of areas from tourism to transport connectivity.

In terms of transport infrastructure development, a four-lane road expansion project has already been implemented along with another scheme to upgrade the provincial airport, he said while visiting the area.

The premier's trip to Loei was considered part of a two-day mobile cabinet meeting that officially starts Tuesday in Phetchabun.

More development works to improve Loei's connectivity to other provinces will follow, he said. 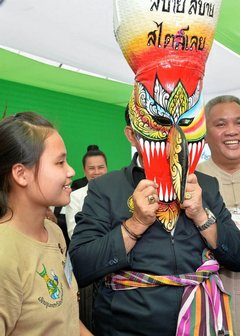 Prime Minister Prayut dons a phi ta khon mask during his visit to Loei on Monday. Spokesmen explained the visit had no political motives, which would be illegal.

The government has sufficient capital to fund more such projects and create jobs in local communities, he said, adding that Thais across the full social spectrum would be treated equally regardless of their political opinions.

For the general election scheduled for early next year, Gen Prayut said he wanted all local leaders to serve as role models and maintain law and order within their respective jurisdictions so the poll can proceed smoothly.

During the premier's meeting with local people at Loei Rajabhat University Monday, Plengmanee Rengsomboonsuk, a former Pheu Thai MP for Loei, was also seen waiting to greet him.

She claimed her meeting with Gen Prayut was unrelated to political matters and that she was present merely in her capacity as president of the province's women's council.

Ms Plengmanee resigned from the party recently and said she will decide in the future where her political affiliations lie.

At Monday's event, front row seats had been reserved bearing the name tags of other former Pheu Thai MPs from the province. The list included Preecha Rengsomboonsuk, Thanathep Thimsuwan, Nanthana Thimsuwan and Wanchai Busaba. However, most of the seats were left empty , an informed source said.

Ms Plengmanee said her husband, Mr Preecha, didn't attend to avoid stirring up public attention in the wake of rumours that his clique was being courted by the Sam Mitr group, or Three Allies, with the aim of getting them to join the pro-regime Phalang Pracharat Party.

The party is believed to have been set up to back Gen Prayut if he bids to reclaim the premiership.

Police will begin enforcing the new traffic law requiring everyone in a vehicle to wear a seat belt from early next month.

Consumer confidence rose for a second straight month in July, reaching a five-month high, but high cost of living remained a concern.