Bangkok tops provinces with 30 seats for grabs in election

The distribution of constituencies for a future general election was announced by the Election Commission and published in the <i>Royal Gazette</i> on Wednesday. 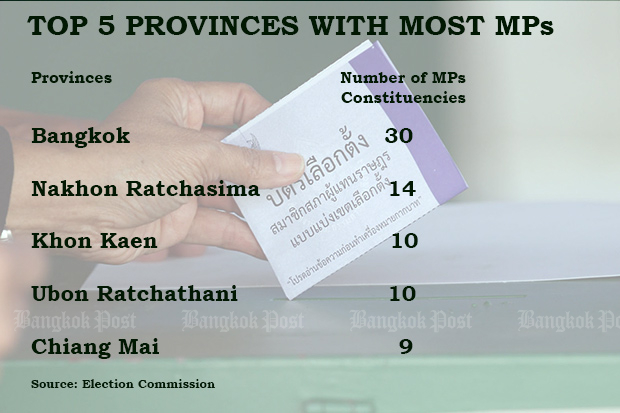 It is confirmed the country will elect 350 MPs, one for each constituency, when a date and time is finally announced for the casting of ballots in all 77 provinces, including the capital.

Bangkok will have the most seats up for grabs with contests in 30 constituencies, followed by Nakhon Ratchasima (14), Khon Kaen (10), Ubon Ratchathani (10) and Chiang Mai (9).

As the country had a population of 66 million as of the end of last month, each MP will represent almost 189,000, according to the election agency.

A date for the polls has not been officially set, but it has to be no later than May next year. Deputy Prime Minister Wissanu Krea-ngam has said the tentative plan for a Feb 24 general election remained intact.

The National Council for Peace and Order last week eased a ban on political activities, allowing parties to hold internal meetings. But political parties are still prohibited from campaigning.