Senate may tip the balance

Special report: NCPO holds all the cards as process to pick upper house gets underway

Seats in the Senate will sport mostly military uniforms when the all-selected upper house meets after the general election. (File photo by Chanat Katanyu)

The Senate selection process has kicked off now that the Election Commission's (EC) regulations governing intra-group voting for 50 senators have been published in the <i>Royal Gazette</i>.

Under the new organic law, the country will introduce a new system in which the members of the Upper House will come from diverse backgrounds across various social and professional groups.

However, the selection of the first batch of senators, known as the transitional Senate which will serve for five years, will be different from that governing future picks.

Of the 250 senators, the EC will supervise the selection of 50 while the majority of the remaining 200 senators will be handpicked by the National Council for Peace and Order (NCPO). Six of the 200 seats are also reserved for the three armed forces leaders, the supreme commander, the defence permanent secretary and the national police chief. 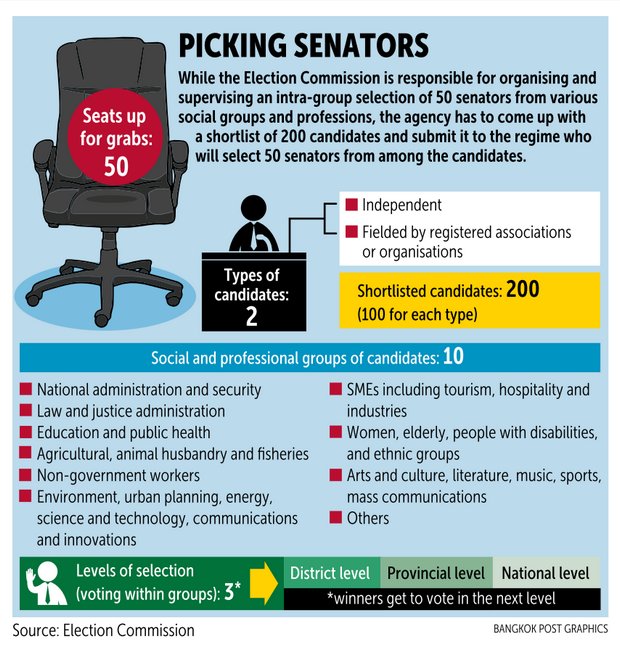 Based on the EC regulations published on Sept 21, there are altogether 10 social and professional groups of Senate candidates (see graphic) who can stand as independents or be fielded by registered organisations. These candidates and their associations must specify to which social or professional group they belong.

The associations have until Oct 21 to register with the EC to be eligible to field candidates in the Senate selection. Their candidates must have been members for at least two years.

The process will occur at three levels -- first district, then provincial and finally national -- after the EC presents a shortlist of 200 candidates from which 50 will be selected by the NCPO to join the 200 others it will select to create the 250-member assembly.

Within five days of the date of the selection of senators being announced in a royal decree, the poll agency will set the date for the voting at district, provincial and national levels.

Candidacy registration will be open for 5-7 days and must take place within 15 days of the decree.

The list of eligible candidates will be published and those who are not on the list can challenge the EC's decision with the Supreme Court.

Candidates must be at least 40 years of age and have at least 10 years of expertise or experience in their chosen fields. Owners of, or shareholders in, media firms are prohibited from the race.

Candidates will select from among themselves up to two contenders and they are not barred from voting for themselves.

At the district level, if more than 10% of candidates in each group do not receive any votes, the EC must order a new vote. Candidates who do not get any votes are not allowed to participate in the revote.

In the national round, the 10 candidates with the most votes in each group and type will be submitted to the NCPO for the final selection.

As for the 200 other senators to be handpicked by the regime, a special panel will be formed to select 400 people with knowledge and expertise in various fields who may be suited to serve as senators.

Their names will also be presented to the NCPO and the final list whittled down to 194 names. They will join the military and police chief occupants of the six other seats.

Selection of 244 senators -- 50 from the intra-groups and the 194 picked by the NCPO -- must be finished at least 15 days before the general election.

On Sept 5, the EC said it was ready to proceed with the selection of senators when the related organic law was in place.

The poll regulatory body held a meeting with senior officials from the Interior Ministry to discuss cooperation and necessary preparations for the Senate polls, according to EC secretary-general Jarungvith Phumma.

Mr Jarungvith said the entire list of intra-group senator candidates is likely to be forwarded to the NCPO chief and Prime Minister, Prayut Chan-o-cha, early next year who will then submit it for royal endorsement.

He said the Interior Ministry was being roped in for an important task -- vetting the qualifications of the candidates.

The budget for organising the Senate selection will be kept below one billion baht, the original estimate, according to Deputy Prime Minister Prawit Wongsuwon.

He has insisted the budget needs to be cut down as far as possible, although his fellow deputy premier, Wissanu Krea-ngam, said the final amount was unlikely to go below 800 million baht.

As the regime will have a say in the final selection of almost all members of the next batch of senators, political parties have demanded that the Senate be excluded from joining in any vote for a prime minister if they can rustle up more than 250 MPs to form a coalition government.

Democrat Party deputy leader Jurin Laksanavisit said at a forum earlier this month that after the poll, the parties which can muster a majority in the Lower House to form a coalition government must be allowed to govern.

However, the charter stipulates the Senate can step in and join MPs in voting for an outsider to become prime minister.

This has raised concerns among politicians that with 250 senators to back it, a pro-regime party could easily gain enough parliamentary support to have a prime minister of its choice and form a government even though it and its coalition partners may not have a majority in the House of Representatives.

Pheu Thai Party politician Chaturon Chaisang said he agreed in principle with Mr Jurin that the biggest party should have the first opportunity to form a coalition government without Senate intervention.

New Phalang Dharma member Rawee Matchamadol also told the forum if parties can pool together more than 250 MPs, they should have the right to form a government.

Siripong Angkasakulkiat, of Chartthaipattana, said his party would refuse to vote alongside the Senate for an outsider prime minister. Red-shirt core leader Jatuporn Prompan said parties should cooperate to form a government without the need for Senate help to find a prime minister.