Pol Maj Gen Surachate 'Big Joke' Hakparn was approved Thursday to become the next chief of the Immigration Bureau, with an automatic promotion to the three-star rank of lieutenant-general. (File photos)

The Police Service Commission held a meeting Thursda to deliberate the reshuffle list involving officers in positions ranging from commanders to deputy commissioners general. The two-hour meeting was chaired by Deputy Prime Minister Prawit Wongsuwon, linked by the public to Pol Maj Gen Surachate and his rapid career rises.

A source at the meeting said Pol Maj Gen Surachate would be promoted to IB chief, a position which holds the rank of police lieutenant general.

He would replace Pol Lt Gen Sutthiphong Wongpin, who is tipped to be made the Metropolitan Police Bureau (MPB) commissioner. 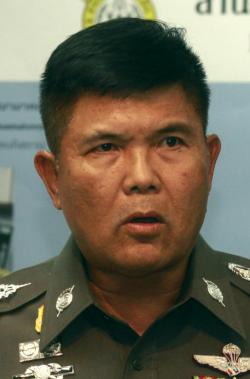 He said this year's reshuffle involves 255 positions. At present, the most senior officers in the Royal Thai Police are members of Classes 35 and 36 of the Royal Police Cadet Academy, he noted.

For those who are to be promoted to become bureau commissioners, they do not need to have worked for that bureau before, the police chief said.

Police lieutenant generals deal with management work and they can use their knowledge and expertise to work in any bureau, Pol Gen Chakthip noted.

He was earlier tipped to be made commissioner of the MPB or the Tourist Police Bureau.

The 48-year-old officer from Songkhla is a member of the RPCA's Class 47.

He rose through the ranks to become acting commander of the Office of the Commissioner General, in charge of policy coordination with the prime minister.

He was later made deputy commander of the Patrol and Special Operation Division and then chief of the Office of the Commissioner-General.

He was subsequently made commander of the Tourist Police Division and the Patrol and Special Operations Division.

In the reshuffle list presented at the meeting, the source said Pol Lt Gen Chaiwat Ketworachai, an assistant national police chief, would be made a deputy commissioner general. He is from the same RPCA Class 36 as Pol Gen Chakthip.