Industry Minister Uttama Savanayana has been voted leader of Palang Pracharath, a group soon to be set up as the core political party supporting Gen Prayut Chan-o-cha as prime minister.

Mr Somkid is part of a trio of political heavyweights known as Sammitr (Three Allies), who have been lobbying experienced politicians to join the movement to back Gen Prayut. To date, they are believed to have lured many former Pheu Thai MPs from the party's northern and northeastern stronghold into the fold.

Puttipong Poonakan, a political adviser to the premier, and Sakontee Pattiyakul, a deputy Bangkok governor, were also chosen as party executives. Along with Mr Nuttapol, they were former co-leaders of the People's Democratic Reform Committee (PDRC).

Led by former Democrat Party powerbroker Suthep Thaugsuban, the PDRC staged months of street demonstrations that paved the way for the 2014 coup. Mr Suthep this year co-founded the Action Coalition for Thailand (ACT), which observers say is also expected to back Gen Prayut if he is proposed as a prime ministerial candidate.

Mr Uttama told the media after the meeting he had no plan to resign as industry minister. “I definitely won’t exploit time and state resources to take advantage of others and we’re ready for scrutiny,” he said.

“When the right time comes, we guarantee we’ll wear only one hat -- Palang Pracharath’s.”

Mr Suvit said the group would initially propose Mr Uttama as its choice for prime minister. “Whether it will be changed to Gen Prayut in the future depends on party executives and clarity from Gen Prayut himself."

Itthipol Kunplome, assistant to the Tourism and Sports minister and a member of the Phalang Chon Party, said he joined Palang Pracharat because he liked its ideology and was convinced it could help Chon Buri province grow through the Eastern Economic Corridor policy.

“Phalang Chon will work alongside Palang Pracharat. We have worked with the government for a while to push policies,” he said. 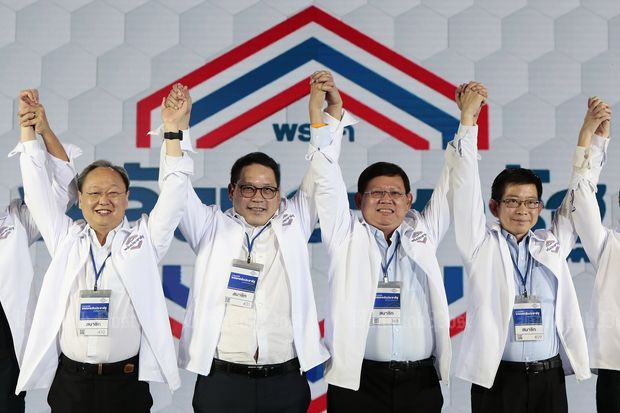 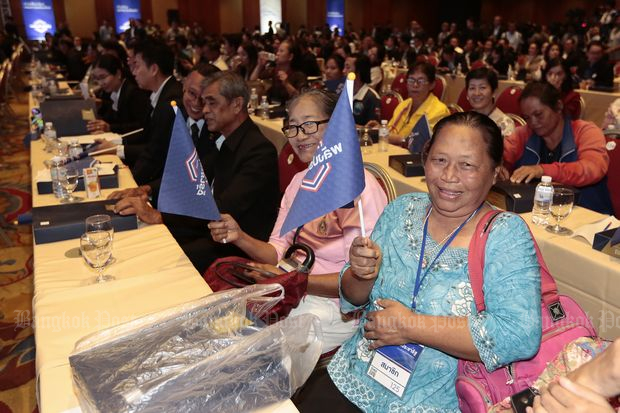 Members of the party show their support. (Photo by Patipat Janthong)