He was greeted by a group of supporters who blew whistles to show their support.

Whistle-blowing is a gesture widely used by the People's Democratic Reform Committee (PDRC), led by Mr Suthep, during its successful protests to topple the Yingluck Shinawatra government during  2013-14. He recently co-founded ACT with former PDRC members to run in the general election.

Mr Suthep set up a table so people could apply at the market. As constitutionally required, a member would have to pay a membership fee.

He campaigned for people to pay a membership fee of 365 baht a year or 3,650 baht for life. “Only one baht a day for the people’s party,” he said.

The Political Parties Act requires a party to collect membership fees from its members at a rate of not less than 100 baht a year or 2,000 baht for life.

ACT aimed to recruit 100 members in each of 77 provinces so it can field candidates in all 350 constituencies. The party also accepts the application at its website and Facebook.

“A political party should belong to people, not to a group of rich men who dominate the country and exploit that power for their own benefits,” Mr Suthep said.

He also talked about his party’s policies on reform in certain areas, including education and political parties. (continued below) 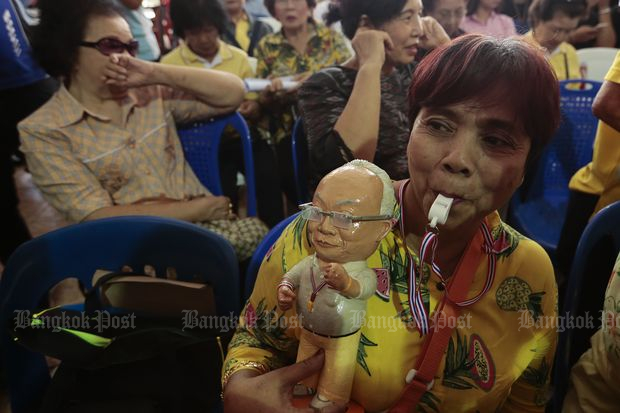 One of Mr Suthep's supporters greets him at the market.

He said he did not want to become an MP or hold any political position.

“Our party will join the government because almost a million people own it. Everyone will want us and ask us to join the government. This is our opportunity to negotiate so we can push our reform agenda and our policy for low-income earners.

“When we join the government, I won’t ask for any position. I’m a man of his word. Every time I go meet people, I listen to their problems and draft policies to solve them,” he said.

ACT has not been approved as a party by the Election Commission (EC) but Mr Suthep said it would likely be endorsed early this month, given that the EC normally takes two months to check a party’s documents.

“While waiting, we thought of a way to start recruiting members. We let people sign a letter of intent to become ACT members. When the party is approved, the document will be treated as an application.”

Once ACT has 100,000 members or more, it will hold a general assembly and elect permanent party executives.

Asked whether ACT would support Gen Prayut Chan-o-cha as prime minister, Mr Suthep said he personally supported him. “But since I’m with ACT, that decision depends on the party executives.

On whether he would join the Palang Pracharath, a group of ministers and bureaucrats tipped to support Gen Prayut, he said it was too soon to tell. 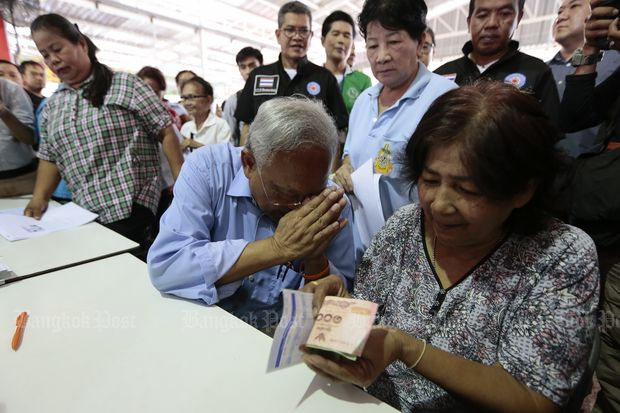 Mr Suthep thanks a member.