A Hyperloop One test vehicle is prepared at a DevLoop track in the Nevada Desert on May 12, 2017. (Reuters file photo)

An option such as Richard Branson’s Virgin Hyperloop One -- which is working on building networks of pods traveling at airplane-like speeds -- is better for Thailand as it would help the nation to be a technological leader, according to Future Forward Party head Thanathorn Juangroongruangkit.

“If you invest in high-speed trains, all you do is import everything from abroad, whereas with the hyperloop there’s an opportunity to build the industry in Thailand if you move first,” Mr Thanathorn said in an interview on Monday. 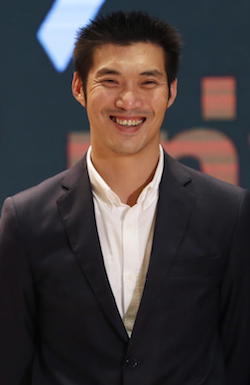 Thanathorn Juangroongruangkit, co-founder and leader of the newly formed Future Forward Party, smiles during the party's visions announcement at the party's headquarters in Bangkok, Thailand, on Monday. (EPA photo)

The military government in power since a coup more than four years ago has prioritised high-speed rail under a 2 trillion baht transport action plan it describes as the biggest such advance for Thailand in two decades. The China project is the first part of a rail line that would eventually run to Laos.

Mr Thanathorn argued that hyperloop technology can create more local jobs, apart from being environmentally friendlier and cheaper to build. It would also be part of a balancing act so that Thailand isn’t reliant on China, he said in the interview in Bangkok.

'Many people said that this is just a dream,' he said. 'But it’s our duty to propose new ideas. We need to dream big to get Thailand out of the middle-income trap.'

Thailand’s military government has focused on major transport projects under an effort to catalyse investment and bolster the economy. Criticism of its policies has begun to intensify ahead of a long-delayed general election now expected in late February next year. Future Forward is one of a number of new parties formed ahead of the poll.

A few firms and investors have been ploughing money into the race for the first working hyperloop system since futurist and billionaire Elon Musk first theorised a model in 2013. Unlike bullet trains, the technology has yet to be deployed for everyday use.

Hyperloop One, which uses magnetic levitation and low-pressure tubes, has been testing in Nevada with speeds reaching 400kph, and is planning three production systems in service by 2021, according to its website.