A man lays flowers at a memorial held to observe the 42nd anniversary of in the Oct 6, 1976 massacre at Thammasat University on Saturday. (Photos by Chanat Katanyu)

Thammasat University has held an event to mark the 42nd anniversary of the Oct 6, 1976 massacre.

The memorial was held at the university’s historic garden, starting with merit-making in the morning.

Apart from the victims’ relatives and descendants, several organisations, academics and representatives from political parties brought wreaths and flowers to pay their respects to the victims. (continued below) 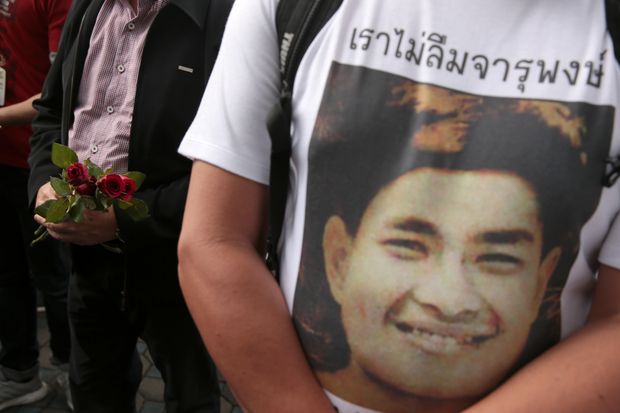 A participant wears a T-shirt with the photo of Jarupong Thongsin, one of students brutally killed 42 years ago. His  body still has not been found.

Boonsom Akkarathammakul, assistant dean of Thammasat University, said a lesson should be drawn from the incident now that Thailand was entering the election mode. “It’s normal to have different opinions. The question is how to deal with them in different ages and times.”

“We hope the political strife would be more creative.”

On this day 42 years ago, security forces and far-right paramilitaries cracked down on thousands of students protesting at the university and nearby Sanam Luang.

The students, from several universities, had demonstrated for more than a week against the return of former military dictator Thanom Kittikachorn from Singapore. They had been painted by media at the time as communists, stirring anger and hatred among far-right groups.

According to the government, 46 died, with 167 injured and 3,000 arrested. Many survivors claim that the death toll was more than 100. The incident was notable for the cruelty and desecration of the bodies.