The official chief spokesman and head of the Public Relations Department of the military regime, Lt Gen Sansern Kaewkamnerd, points the finger of blame at apathy for slow public acceptance of the Sustainable Thainess campaign. (File photo)

The taxpayer-funded <i>Thai Niyom Yangyuen</i> (Sustainable Thainess) programme may not be well-known to many people mainly because it is not a populist scheme, according to government spokesman Sansern Kaewkamnerd.

In a recent interview with the Bangkok Post about the scheme, Lt Gen Sansern admitted the programme, launched earlier this year to promote sustainable Thai-style development, may go unnoticed by the broader public.

In defence of the government's handling of the scheme, he said the scheme has been under way for just eight months.

His comments were made in response to claims in media reports that Prime Minister Prayut Chan-o-cha is unhappy with various ministries responsible for implementing the scheme due to their failure to push the scheme adequately.

According to those reports, the ministries responsible for implementing Thai Niyom Yangyuen, along with government officials have failed to raise adequate public awareness of the programme despite getting an additional budget allocation in the 2018 fiscal budget year.

About 95.7 billion baht was approved for the scheme targeting 81,151 communities nationwide.

The scheme is widely seen by critics as the regime's attempt to shore up its popularity in the lead-up to the general election scheduled for Feb 24.

Political observers believe that if its impacts are not being touted to the wider audience as the election approaches, a pro-military party will have a difficult time canvassing support. 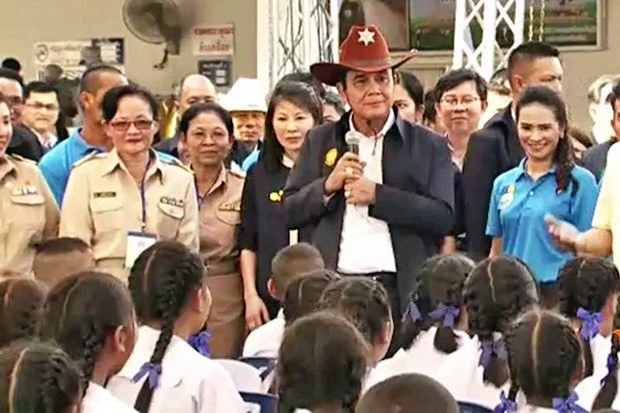 The spokesman also denied Thai Niyom Yangyuen is overlapping the Pracharat campaign, saying even though both of the government's initiatives are similar, they are not one and the same.

The Pracharat model means the people, the government, and businesses must work closely together to pursue sustainable development and help farmers, workers, and communities secure their livelihoods. It aims to strengthen the country's economy at the grassroots level.

He insisted the government is not overspending.

"I can assure it's not a waste of money. Distribution of income has improved and the competitiveness indexes are better. The government has work to do to help those who get stuck in the rut," he said.

A source in the Interior Ministry, which is a key player in driving the programme, also conceded that more work needs to be done to elevate public awareness of the Thai Niyom Yangyuen programme.

According to the source, Thai Niyom Yangyuen strategy is made up of a variety of projects which lack ties to the "main scheme".

One example is "Otop Nawatwithi", also under Thai Niyom Yangyuen, but few people are aware of this, said the source.

Moving forward, government agencies will be asked to include Thai Niyom Yangyuen in their projects to help elevate public awareness, according to the source.

"The programme itself isn't a problem. The problem is that it is not being touted to a wide audience," said the source.

Interior permanent secretary Chatchai Promlert denied reports that a committee was set up to investigate the programme, saying implementation is usually under review by provincial authorities.

Orathai Kokpol, a political scientist at Thammasat University, however, doubted the Thai Niyom Yangyuen programme would work because the need for local development was not assessed properly.

"It is like giving everyone the same-size clothes," she said.