New Royal Thai Army commander Gen Apirat Kongsompong says there could be a coup if new political disagreement breaks out after the election. (File photos)

New army chief Gen Apirat Kongsompong has not ruled out another military coup if fresh political unrest breaks out after the country switches back to civilian rule following a general election next year.

Asked by a reporter if he was prepared to launch another coup, Gen Apirat said: "If politics does not create riots, nothing will happen."

There have been more than 10 military coups in the past, but recent ones were the result of political unrest, Gen Apirat said.

Gen Apirat's father, Gen Sunthorn, was a leader of the 1991 coup that ousted the elected government of Chatichai Choonhavan. It ended very badly a year later when troops killed an unknown number of people protesting the army rule in the Black May tragedy of 1992.

Thailand has been under military rule since the May 2014 coup, which the army said was necessary to restore order after months of anti-government protests against the Yingluck Shinawatra government.

In 2006, the military led by then army chief Gen Sonthi Boonyaratglin staged a coup that toppled the government of Thaksin Shinawatra.

When Gen Prayut staged his coup in 2014, Gen Apirat was serving as commander of the 1st Division, King's Guard, based in Bangkok, which was a key unit in the putsch.

Soldiers were ordered the time to maintain order, and were not thinking of taking political power, Gen Apirat said.

"I believe Gen Prayut did not have such an idea. But he had to make a sacrifice. If Gen Prayut had not made the decision, no one could say what would have happened," Gen Apirat said.

He praised Gen Prayut for his dedication while serving as army chief. "He is my role model," Gen Apirat said.

"I really hope violent incidents will not re-occur because of political rivalry. It is the country that stands to lose. The military will never defeat the people. But those who incite unrest, make bombs are the losers and make the country suffer," he said. 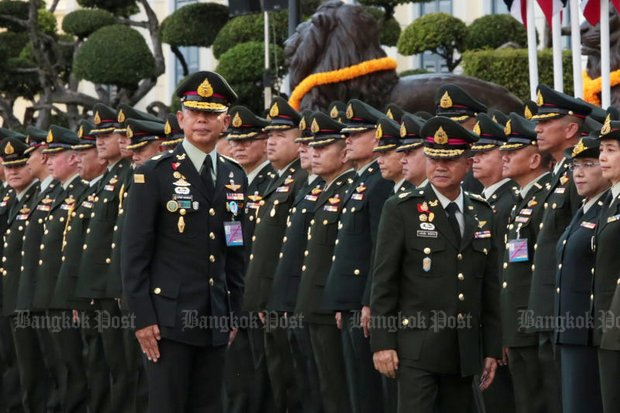 Gen Apirat, who took up his post early this month, said the army was being closely watched and would strive to remain neutral.

He said he called a meeting of unit commanders and gave them information detailing the time line toward the general election expected in late February so they will know how to act ahead of the poll.

"We have to tread carefully," Gen Apirat told reporters.

He insisted that the army under his leadership will maintain its professionalism and neutrality. Whoever forms the government, the army is duty-bound to support their policies, he said.