Chief of Defence Forces Pornpipat Benyasri has defended the army chief, who said he would not rule out another military coup, saying this would only be proposed as a final option to deal with political unrest.

Gen Pornpipat said army commander-in-chief Apirat Kongsompong may have made such comments based on experience.

"That [a coup] is a final plan to deal with [unstable] situations," the defence forces chief said, referring to Gen Apirat's comments. 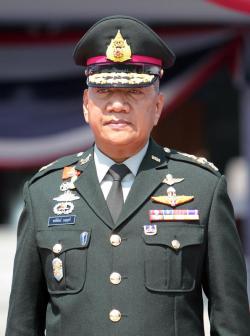 Gen Pornpipat was briefing the media after a meeting between the military and police top brass on Friday. The event was attended by Gen Pornpipat, Gen Apirat, air force chief ACM Chaiyapruk Ditsayasarin, and navy chief Adm Ruechai Ruddit, all of whom were promoted to their posts on Oct 1, along with national police chief Chakthip Chaijinda.

On Wednesday, Gen Apirat stoked fear among politicians by not ruling out another military putsch in the future. "If politics does not create riots, nothing will happen," he said.

His comments were supported by ACM Chaiyapruk, who the following day called Gen Apirat's remarks reasonable. The air force chief, however, stressed no one wants to see a putsch and as long as everyone plays by the rules, nothing would happen.

Regarding preparedness for the general election, expected to take place in February, Gen Pornpipat said he has emphasised that the military must act in line with their duties and create better political understanding between people.

He said the country has been peaceful for the past four years without mass political demonstrations and citizens have been able to live their lives normally.

When asked what the role of the military could be if political strife occurs again after the National Council for Peace and Order (NCPO) leaves office, Gen Pornpipat said the country has made progress over the past four years and is now on the road to democracy.

"Instead of fretting about unrest, if we work together to make good decisions and share reasonable stances on issues, we may not have to consider the possibility of unrest or have to worry about whether the military will take action or not," Gen Pornpipat said.

According to the defence forces chief, no political activities have shown signs of causing potentially serious conflicts while the country's laws can still be enforced and respected by people.

"If we talk about incidents that have not happened or are unlikely to occur, people may be worried about it," Gen Pornpipat said.

He said people should receive and study information with care, should not believe everything they hear, or panic about trivial issues they come across.

"The standpoint of the military and Royal Thai Police is to make people happy and the country peaceful," the defence forces chief said.

When asked to confirm that a coup would be the final option to be used to deal with a political quagmire, Gen Pornpipat said he still sees no chance of unrest at the moment.

As long as the law can still be enforced as usual, there is nothing for Thai people to be worried about, the defence forces chief said, adding: "I believe there are alternative methods to a coup."

Gen Apirat, responding to fierce criticism of his comment by politicians, said "This is normal."

"Whatever," said the army chief when political activist Ekkachai Hongkangwan reportedly said he would file a police complaint against him for treason.

Jatuporn Prompan, former chairman of the red-shirt United Front for Democracy against Dictatorship, said Gen Apirat made very frank remarks about a coup.

"There is nothing complex about it as Thai people may not be accustomed to people telling the truth. No coup-makers have said before staging a putsch that they would do so," Mr Jatuporn said.

He said he wants to invite political parties, those in power and people to find ways to prevent any moves that might fall under the conditions that necessitate a coup, as spelled out by Gen Apirat.

Jarungvith Phumma, secretary-general of the Election Commission, said the NCPO could be asked to allow political parties to organise more activities for that purpose in the election run-up.

He said over the past four days, 29 organisations from 14 provinces had registered to send their members to contest the Senate selection. Registration ends next Wednesday.