The video for "Prathet Ku Mee" has been viewed more than 27 million times, but a Nida survey found a majority of people have not watched it or heard the song.

A majority of people say they haven't watched the video or heard the song "Prathet Ku Mee" (What My Country's Got), and most who have say they are indifferent to it, according to an opinion survey by the National Institute for Development Administration, or Nida Poll.

The poll was conducted on Oct 31-Nov 2 on 1,259 people aged 18 and over of various levels of education and occupations throughout the country to compile their opinions on the contoversial song by the "Rap Against Dictatorship" group which had scored over 27 million YouTube views at noon on Sunday.

Of those who had listened to the song, 51.61% said the lyrics reflect truths in Thai society and politics; 39.66% viewed the song as being socially and politically sarcastic; 18.41% said it is normal for a rap song to contain strong lyrics; 10.82% were of the opinion that the lyrics are offensive; 7.78% said the song is too pessimistic about Thailand, thus damaging the country's image; 6.64% said the song is intended to cause social division; 6.45% thought the song has a hidden political agenda; 3.61% said it is improper for the clip to use images that resemble the October 6, 1976 bloodshed; and 2.28% said the song is intended to arouse resistance against dictatorship.

Asked how they feel after listening to the song and seeing the clip, 53.70% said they are indifferent to the song; 30.93% said they like it; and 5.37 said they dislike it. 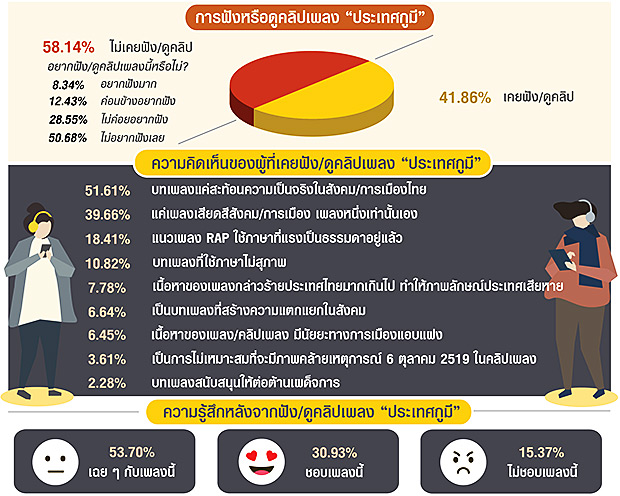