Authorities check boxes containing copies of the calendar with photos of former prime ministers Thaksin and Yingluck Shinawatra at a shop in Warin Chamrap, Ubon Ratchathani, on Tuesday. (Photo from Facebook/รัตนา เสรีชน)

Authorities have raided an air-conditioner shop in Ubon Ratchathani and seized some 5,000 copies of the calendar bearing the photos of Thaksin and Yingluck Shinawatra.

Thai media reported a combined force of 50 police, soldiers and administrative officials searched the Udom Air shop in Warin Chamrap district on Tuesday. They acted on the junta’s order on the prevention and suppression of threats to peace and order.

They had been informed the shop was the supply source of the one-page 2019 calendar for red-shirt members in the northeastern province.

There, the authorities found nine sealed boxes, each containing 600 copies, and another opened one, totalling 5,553 copies.

The owner of the shop, Rattavee or Rattana Puiprom, 46, was not there during the raid. Her son, Saravud Chantadee, 23, said she had gone to Bangkok.

Mr Saravud said he saw the boxes lying around for several days but did not know who delivered them since he just took care of the shop during his mother’s absence.

Mr Saravud was questioned further at the Warin Chamrap police station about the source of the calendars but was not charged.

The calendar was first seen in the province in late October.

Shortly after the raid, a Facebook user by the name “Rattana Serichon”, posted: "I'm not home today but we had guests. They took all souvenirs." She also added the hashtag that translates into "calendars are weapon of mass destruction".

A source said the raid aimed to stop the dissemination of documents which may disrupt peace and order.

“The two ex-PMs are wanted on arrest warrants so it’s not appropriate that their pictures be distributed among the public,” the source said.

He added the charges had yet to be determined. Initially, the materials were seized and no one has been charged.

Mrs Rattawee is reportedly a co-leader of the Serichon group under the wings of the United Front for Democracy Against Dictatorship.

Deputy police chief Gen Srivara Ransibrahmanakul said on Tuesday 2 million copies of the calendar were being distributed to people in Bangkok, the Northeast and the North.

“We have yet to find out who made it. It was given out at Thammasat University, Constitutional Court, Udon Thani and Ubon Ratchathani. Initially, we don’t find any violation of laws,” he said.

He added the two former PMs were unlikely the ones who made it since they were abroad.

The calendar features the two former prime ministers in a wai against a red background, with handwritten new year’s greetings and their signatures.

“I love and miss everyone. I wish I could join and support you all. I wish [you all] happiness and success and hope you get out of the problems plaguing you now. Let 2019 be the year of Thais,” read the message under Thaksin’s photo.

“I hope my fellow people are happy and have a good life and your businesses become more prosperous,” read the other message under Yingluck’s photo.

Earlier on Monday, authorities visited a house and were given a few copies to the calendar in Non Sa-at district, Udon Thani. 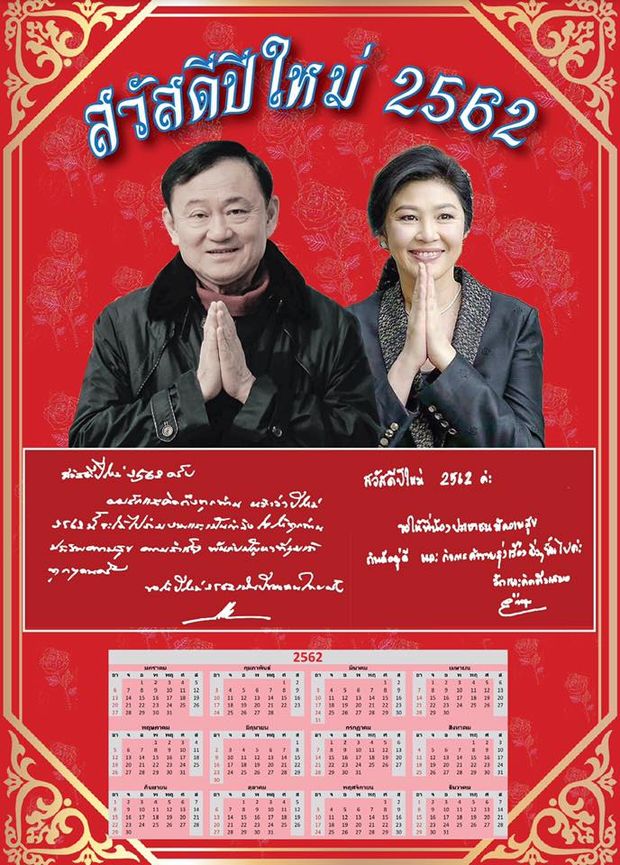 A copy of the calendar making the rounds in social media on Tuesday.