Vivat Yodprasit, aka the popcorn gunman, arrives at the Criminal Court in Bangkok to hear the ruling of the Supreme Court read out on Wednesday. He was later returned to prison. (Photo by Tawatchai Kemgumnerd)

The Supreme Court on Wednesday sentenced "popcorn gunman" Vivat Yodprasit to 37 years and four months in prison for shooting at political demonstrators in Laksi in 2014, killing one person and wounding three others.

The court overturned last year's acquittal by the Appeal Court.

The Supreme Court ruled that photographs and testimony by Vivat's elder brother confirmed that he was the black-clad man, his face covered with a woollen balaclava, who fired gunshots at Laksi intersection on Feb 1, 2014, during a confrontation between pro- and anti-Yingluck Shinawatra government demonstrators.

The court also ruled that Vivat, 28, had confessed during police interrogation because the evidence proved he was the gunman. There was no evidence he was coerced into confessing, as claimed.

Although there was no direct evidence that Vivat shot anyone dead, his participation in the demonstration  and photographs of him there justified his being held responsible for the death and injuries.

The Supreme Court upheld the ruling of the Criminal Court, which in 2016 sentenced him to prison.

In June last year the Appeal Court acquitted him of the charges, giving him the benefit of doubt because there was insufficient proof he really was the gunman.

In the court of the first instance, he was convicted of murder and illegal possession of an assault rifle and ammunition used in the deadly clash between supporters and opponents of a general election, three months before the May 2014 military coup.

Throughout his trial he denied any wrongdoing.

The lower court's original sentence was reduced from life imprisonment because he confessed during police interrogation.

Vivat was given the sobriquet the "popcorn gunman" because media photographs showed a man wearing a mask and concealing an assault rifle inside a popcorn bag firing several shots during a battle between supporters and opponents of then-prime minister Yingluck at Laksi intersection on Feb 1, 2014. 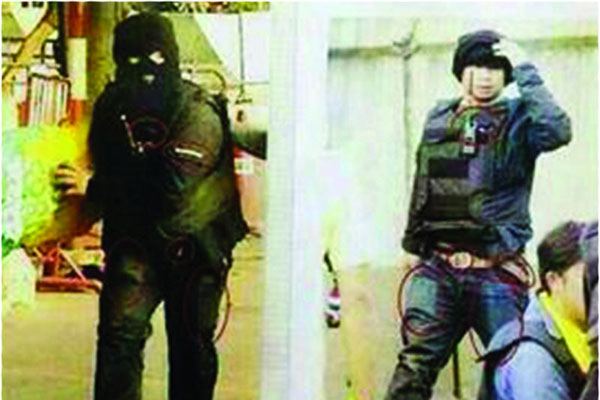 These photos of the ‘popcorn gunman’ who fired shots during a clash at Laksi on Feb 1, 2014 were posted on the Facebook page of the spokesman of the Royal Thai Police Office in early February 2014.