The Democrat and Thai Raksa Chart parties announced Tuesday they would not join hands with the pro-regime Palang Pracharath Party (PPRP).

Democrat Party leader Abhisit Vejjajiva insisted he would not bow to any pressure to pick sides between the pro-regime PPRP or the Pheu Thai Party.

The Democrat Party under his leadership is now focusing on repositioning itself as an alternative for the country's future rather than getting involved in political polarisation, he said.

He denied talk that efforts are under way to force the Democrat Party to choose a side.

"We are not interested in a game of polarity because the country has better options," Mr Abhisit said, adding that Thai politics may see more new players emerge in the future, in addition to the PPRP, Pheu Thai and Democrats.

"Some told me to choose between dictatorship and democracy. But I am not sure if those who claim to be champions of democracy are actually so in spirit. Did they have a role in making the country lose democracy?"

"Some talked about choosing between good guys and bad guys. I want you to consider if they are really good. Those who claim to be good also behave like bad guys ... We have to move past these things and sit down and discuss where we want the country to go -- be it power centralisation, populism or the approach of the Democrat Party," Mr Abhisit said.

He said the party would offer itself as an alternative for the country and would stick to the principle of liberal democracy, putting the people first.

Asked to comment on Pheu Thai's strategy of splitting itself up and sending members to form new parties to secure as many votes as possible in the next election, and the PPRP's strategy of courting politicians from other parties into its fold, Mr Abhisit said he was only concerned about how to improve the state of politics and put an end to political intrigue.

The former prime minister said the party's strengths lie in its ideology, policies and personnel, adding party members must be unwavering in their commitment to the party and its beliefs.

He shrugged off the defections of 17 Democrats to other parties, particularly the PPRP, saying switching parties was a normal practice ahead of elections.

But he said that it remains to be seen whether those former MPs would be re-elected.

"The PPRP has drawn many former MPs from other parties but it may end up being full of those who are still former MPs after the poll," Mr Abhisit said. 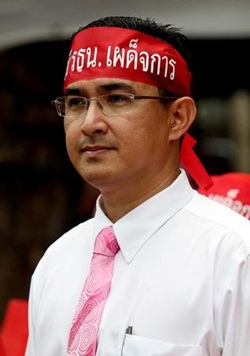 Mr Korkaew, a co-leader of the red-shirt United Front for Democracy against Dictatorship, said it should be noted the military government has approved its latest cash handouts to low-income people ahead of the election slated for Feb 24.

Critics say the cash-handout scheme is the regime's latest move to help the PPRP gain an unfair advantage over its rivals.

The Election Commission (EC) previously said investigators would look into whether the government's cash handouts represent a form of vote-canvassing.

The PPRP, led by Industry Minister Uttama Savanayana, has made it clear it will support Gen Prayut should he bid to reclaim the premiership. A number of Pheu Thai faithful have defected to the party.

Mr Korkaew said the regime has always blamed politicians for causing political conflict, but as it happens the pro-regime PPRP is now full of these politicians.

The PPRP has appointed its secretary-general Sontirat Sontijirawong to head the party's team of strategists who will plan for the election campaigns.

Deputy Prime Minister Wissanu Krea-ngam said there is no need for Gen Prayut to be a member of a political party if he wants to stage a comeback as a prime ministerial candidate on the ticket of any party. The law does not specify that candidates proposed by a party must be its members.