Whiff of populism in latest schemes

In 2014, government vowed not to use any populist policies for farmers such as price guarantees, promising instead to power production costs. (Photos by Pattarapong Chatpattarasill)

A tranche of seemingly populist policies has been sprouting forth from the military-led government, pointing to something much more than a bid to boost domestic demand amid a murky economic outlook.

Critics argue that by using fiscal policy to splash out cash and provide generous benefits to the masses, the government is engaged in a deliberate effort to garner popularity ahead of the general election scheduled to take place early next year.

Pork-barrel policymaking and populism have been recurring modes of operation adopted by Thai politicians, in this case military strongmen, to rev up support from the general populace.

Praised by many at the bottom of the social hierarchy and loathed by numerous opponents, the legacy of Thailand's populist policies centres on Thaksin Shinawatra, whose government introduced schemes like 30-baht universal healthcare and Village Funds to provide relief to the rural poor.

"These policies only have a short-term stimulus effect and contribute diminutively to GDP growth," said Somjai Phagaphasvivat, an academic at Thammasat University.

It's always been a love-hate relationship with populist policies in Thailand, with supporters voicing strong support for these stimulus and subsidy measures and critics opposing them on grounds of fiscal discipline.

Still, the junta-led government continues to gravitate towards populist policies when it comes to gaining support from the public.

There have been many populist policies rolled out since the incumbent regime seized power in 2014, but the most recent ones are concentrated on providing welfare benefits for low-income earners and shopping tax breaks for consumers.

Taxpayers can claim a maximum 15,000-baht income tax deduction on purchases of tyres, books, e-books and One Tambon One Product (Otop) goods. This scheme runs from Dec 15 to Jan 16.

In addition, with a 20,000-baht maximum and 5% value-added tax (VAT) refund, shoppers will be eligible for a 1,000 baht return, according to Finance Minister Apisak Tantivorawong.

Only spending on debit cards with savings accounts linked to PromptPay will qualify for the VAT refund. The VAT refund window coincides with Chinese New Year, which falls on Feb 5 next year.

For low-income earners, one of the notable policies is a scheme enabling each welfare smartcard holder to withdraw 100-200 baht in cash to spend on items other than the basic necessities at Blue Flag outlets, along with bus and train tickets.

Populism by definition is neither good nor bad, but many people have a pessimistic view of populist policies because they affect a government's fiscal discipline, induce long-term dependency and create unsustainable development, Mr Somjai said, citing Venezuela's ongoing crisis as an example.

"I personally am not against populist policies, but the [government's] rolled-out policies do not add value or address Thailand's structural problems," he said. "It is also uncertain whether the majority of the public would be supportive of these policies because certain groups, such as small and medium-sized enterprises and the grassroots, do not have sufficient purchasing power."

The schemes could also backfire, he said, as the groups that the government intends to support may eventually become opponents of the policies because of repetitive use and minuscule benefits.

Household debt has reached its highest level since 2009, surging 5.8% in 2018 to 316,623 baht per household, a phenomenon driven by underground debt, which makes up more than a third of total household debt, said the University of the Thai Chamber of Commerce (UTCC).

Although there is an actual effect of stimulating the economy, populist policies produce only minimal, short-term gains, with most benefits accruing to major retailers instead of small businesses, said former finance minister Thirachai Phuvanatnaranubala.

"Money spent on these schemes has no benefit, and these policies can damage macroeconomic stability," Mr Thirachai said.

Many observers have said the introduced policies are motivated by politics as the tentative Feb 24 election date fast approaches.

They also voiced concerns that the programme is likely to allow the pro-regime Palang Pracharath Party to capitalise on the popularity of the policies and gain an unfair advantage over rival parties at the polls.

Mr Apisak, however, insisted that the 5% VAT refund is not intended to woo voters for the pro-regime political camp, saying the tax rebate programme was conceived before the "Shop Chuay Chat" tax break programme was introduced in 2015.

That explanation cuts no ice with Mr Thirachai, who said: "These measures are definitely populist policies aimed at vying for votes to take an early advantage in the upcoming election. The economic team of this government has always resorted to [populism] to garner support."

Nipon Poapongsakorn, a distinguished fellow at the Thailand Development Research Institute (TDRI), said the 5% VAT refund granted to shoppers spending up to 20,000 baht from Feb 1 to 15 next year would "make the situation worse".

He said the Finance Ministry shouldn't roll out exorbitant measures except in times of crisis when genuine stimulus is needed.

"I can see only one reason," Mr Nipon said. "It would give favourable benefits [for some political camps] ahead of the election."

He urged the ministry to explain how it would offset VAT losses. 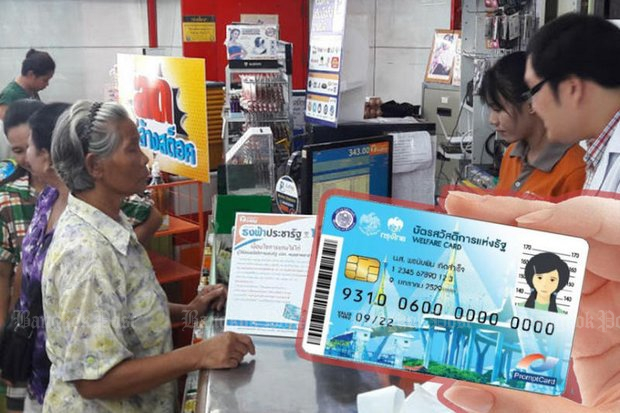 To date, some 11.1 million welfare cards have bee distributed to low-income earners.

"The return [of VAT] to debit card holders without knowing the levels of their income would mean that middle- and high-income earners would also be entitled," said Somchai Jitsuchon, research director for inclusive development at the TDRI.

Despite numerous opponents and sceptics, there are supporters in agreement with the government's recent policies, with some of the largest shopping mall and retail operators in the country identified as policy advocates.

Voralak Tulaphorn, chief marketing officer of The Mall Group, said she would be satisfied with the new economic stimulus measure during Chinese New Year, which runs from Feb 1 to 15.

"The measure, which focuses on debit card spending, will be good because debit card holders have deposited money in their bank accounts," Mrs Voralak said. "With the new measure covering the mass customer group with no limitation on purchasing any kind of products, the impact will be better than the recently announced Shop Chuay Chat scheme."

Although consumer spending power during the Chinese New Year festivities is already high, the new measures will help enhance positive sentiment and encourage consumers to spend more than usual, she said.

"We are ready to support the campaign, and our payment system is equipped to accommodate the 5% VAT rebate," Ms Salinla said.

Piyawan Piyapong, senior vice-president for new service development and online at Big C Supercenter of BJC Group, agreed that the scheme would help boost consumer spending and provide an incentive for customers to use electronic payment for goods purchases.

Thanawat Phonvichai, director of the Center for Economic and Business Forecasting at the University of the Thai Chamber of Commerce, said December's consumer confidence is likely to improve after the government issued a year-end economic stimulus package including the tax deduction on purchases of tyres, books and Otop goods.