NLA closes in on venue to host parliament sessions

A special National Legislative Assembly (NLA) committee has narrowed down its selection of places to serve as a temporary venue for parliamentary sessions to three. 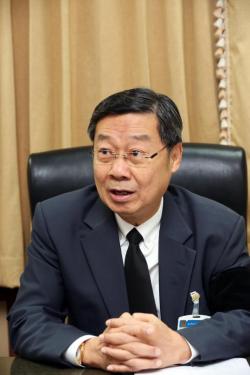 Surachai: Looking for the best deal

NLA vice president Surachai Liengboonlertchai said the committee in charge of finding a temporary venue for the meetings has selected three out of nine venues for further consideration.

Although the TOT conference room on Chaeng Watthana Road has the highest support from committee members, the committee will consider all factors when making a final decision.

The other venues selected are the United Nations auditorium on Ratchadamnoen Nok Avenue and the meeting hall of the army-run Channel 5 on Phahon Yothin Road.

According to Mr Surachai, the TOT conference room is spacious and can accommodate up to 750 people while Channel 5's meeting hall is suitable for further modifications.

Legislators are looking for a temporary venue while they wait for a new parliament building that is scheduled to open by the middle of next year to be completed. Also, the land the current Parliament House stands on is scheduled to be returned to the Royal Household Bureau by the end of this year.

Mr Surachai said the committee has to hold talks with the management of the three venues and negotiate over rental fees and installation of equipment.

The committee will also discuss other additional services including small meeting rooms for side meetings and guests, he said.

He said these venues are not designed for parliament meetings and modifications are needed to ensure that the sessions proceed in a secure environment.

The UN auditorium is the least favoured among the three due to limited parking space, he said, adding the panel has yet to search for parking options and make arrangements.

Mr Surachai said he expects the committee to meet again next week to pick one of the three venues since the first parliament meeting is scheduled for Jan 10 of next year. However, he declined to discuss the estimated costs.

"We'll have to negotiate for the best deal. This is an urgent issue but we take information security and safety seriously. We'll try our best to save as much money as possible," he said.

The new parliament building, named "Sappaya-Saphasathan", was originally scheduled to open in 2015 as stipulated in a contract signed in 2013. It sits on a bank of the Chao Phraya River and covers 300,000 square metres of land.

However, the construction has faced numerous delays due to the slow handover of the site to the contractors, problems with soil removal, as well as several requests for design changes and a longer construction period.