A key member of the pro-regime Palang Pracharath Party has denied the authenticity of a table arrangement plan of its 650-million-baht fundraising dinner leaked to media after the event.

Party secretary-general Sontirat Sontijirawong, who is also commerce minister, was responding to calls for the party to explain the sources of funds it raised by selling seats at a fundraising dinner on Wednesday.

The new party came under fire after Isra News Agency published online the photo of a seat map of the event, which was divided into zones.

The party claimed to have sold out all seats at 200 tables of 10 at 3 million baht per table, raising 600 million baht. Deputy leader Nattapol Teepasuwan said the party received 650 million as some donors were willing to pay more for the meals.

The map shows tables in colour-coded zones described by names similar to government agencies. Twenty tables were designated in Thai as “Finance”, three as “TAT” (the acronym for Tourism Authority of Thailand) and 10 as “BMA” (Bangkok Metropolitan Administration), Isra News reported.

The news agency claimed it had sent reporters to the event who had seen the map and an organiser confirmed its authenticity.

The report led to discussions about possible conflicts of interests since four of the incumbent ministers, including Mr Sontirat, are the executives of the party.

The map also raised the questions whether the three agencies actually bought seats at the tables with taxpayers’ money or were asked to find donors or buyers who are probably companies with close ties to them. If the latter is the case, critics fear the agencies might have to pay them back in some ways in the future.

All three agencies denied using taxpayers’ money to buy the seats at the tables.

Mr Nattapol said the party would report the details of the fundraising to the Election Commission in three weeks since it had to check whether the donors’ qualifications are in line with related laws.

EC secretary-general Charoongvit Poomma said a party which has held a fundraising event must report the results to the EC in 30 days and made the information public. “We will start investigating once we receive the information,” he said. 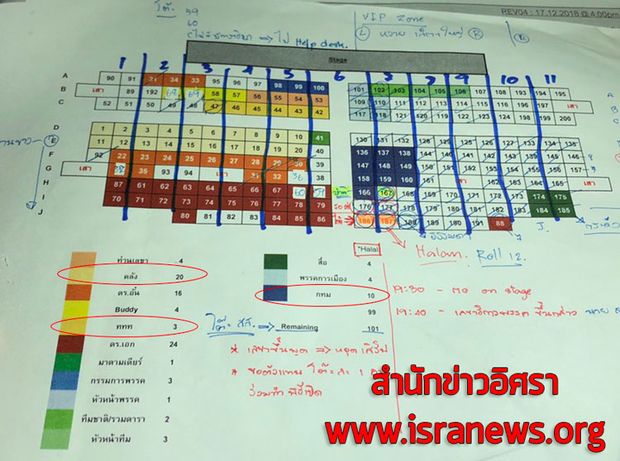