The Election Commission (EC) is speeding up its probe into two cases of alleged violations of the law governing political parties by the pro-regime Palang Pracharath Party (PPRP), saying results of the investigation are expected in up to two months.

The cases involved a recent Chinese-style fund-raising banquet organised by the PPRP at Impact Muang Thong Thani in Nonthaburi on Dec 19 and a video clip narrated by a man accusing the PPRP of forcing an old woman to apply for the party's membership in Yasothon's Loeng Nok Tha district in exchange for a state welfare card for low-income earners.

Information about the cases gathered from media reports was presented at the EC's meeting on Monday and it was agreed that the investigation into these two cases should be completed in one to two months, said EC secretary-general Jarungvith Phumma.

In the investigation into the fund-raising event, the EC had begun by inviting members of the media who attended the event to provide the EC with information about the event, he said.

The PPRP's fund-raising banquet sparked criticism from parties and calls for the EC and the National Anti-Corruption Commission (NACC) to investigate it for transparency following reports that government officials and political office-holders contributed to the campaign.

Under Section 76 of the organic law governing parties, government agencies, state enterprises or any agency in which the state is a major shareholder, or is barred from making political donations or taking part in such activities.

Former election commissioner Somchai Srisutthiyakorn previously threatened to file a suit against the EC for dereliction of duty under Section 157 of the Criminal Code, if it fails to rev up moves to probe the banquet case within a week. 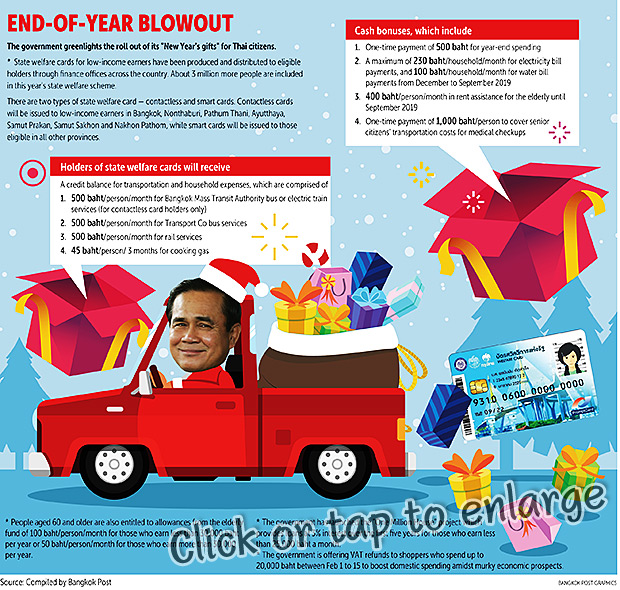 Deputy Prime Minister Wissanu Krea-ngam, meanwhile, said the law doesn't actually prohibit the four cabinet ministers who are members of the PPRP from attending the funding-raising event, but they are prohibited from making speeched deemed to be election campaigning.

The PPRP, meanwhile, addressed the media about its reaction to the controversy surrounding the video clip of a woman being forced to apply for PPRP membership before she was handed her state welfare card.

Suraporn Danaitangtrakul, a PPRP executive, said the party's legal team is investigating the case and the party is taking the matter seriously as it could cost a candidate his chance to continue his role, or even lead to the party's dissolution.

The case came to light when a Facebook user shared a video clip in which he claimed that low-income earners who came to collect their state welfare cards were asked to apply as PPRP members or they would not receive their cards.

In the video clip, a young man described an alleged violation of Section 30 of the organic law on political parties, which prohibits acts offering incentives for people to become a member of a party, said Mr Suraporn.

But the party has examined the video clip and does not see any evidence to back up the man's claims, he said.

The man in the clip also allegedly talked about 100 baht being given away as some form of similar incentive or inducement, but this was not captured on the video, he said.

The party is now strictly following the law, which requires it to take action to stop any alleged misconduct, he said. More action will be taken when facts from the party's own investigation into the case become available, he said.

The party has also declared that it had nothing to do with the state welfare card distribution. It told all prospective candidates what they could and could not do to avoid violating the law, he said.