Plan was to nominate Chadchart for PM

Democrat Party leader Abhisit Vejjajiva told reporters there is no way he could join Pheu Thai in order to select a non-military prime minister. (File photo)

Democrat Party leader Abhisit Vejjajiva has rejected Pheu Thai's offer to make a pact with the Democrats to form a government of national unity after the Feb 24 general election.

Mr Abhisit said Tuesday he sees no reason to agree to the proposal because such a government would be possible only with the consent of all parties.

On Monday, a core Pheu Thai member said the party might not win enough seats in the next election so made the offer to join forces with arch-rivals the Democrats.

There was a report that former transport minister and key Pheu Thai figure Chadchart Sittipunt would be nominated as prime minister if such a national government was formed.

The high-level party member, who did not wish to be identified, made the comments during a visit to China by leading Pheu Thai politicians, including Khunying Sudarat Keyuraphan who heads the party's strategy committee.

The core leader said the new electoral system, under which large parties are predicted to win fewer seats than in previous polls, is not conducive to Pheu Thai having enough weight in parliament to see its candidate become prime minister. 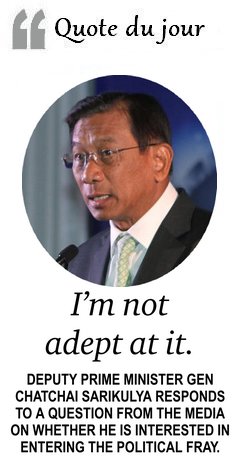 The Pheu Thai member said the party stands ready to invite the Democrats, who could win between 80-100 seats, to join it in forming a coalition government.

Pheu Thai, the Democrats and their allies must have at least 375 seats between them in order for a Pheu Thai-nominated candidate to become prime minister.

A vote in parliament for the next prime minister from candidates nominated by the parties will also involve the 250 senators selected by the National Council for Peace and Order. Therefore, a total of 750 parliamentarians will vote for a prime minister; 500 MPs plus the senators.

The core Pheu Thai member said the party has floated the idea of allowing Mr Abhisit to become parliament president and allocating some "top-grade" ministries to the Democrat Party in return for its support for a Pheu Thai-nominated prime ministerial candidate.

Mr Abhisit also  said the Democrat Party has finished formulating its policies for the election, adding that a process to select poll candidates is expected to be concluded this week.

The party's candidates -- 350 in the constituency system and 150 in the party-list framework -- will be revealed to the public after being formally endorsed by the party's executive committee, Mr Abhisit said.

All of them will be invited for a briefing on the party's policies and related election rules, the former prime minister added.

Mr Abhisit also warned the government not to use its power and state mechanisms to gain an unfair advantage over other parties ahead of the election.

He said that even though the Election Commission has the authority to directly oversee the election, the current government still wields power over the commission as it can remove election commissioners from office and can change election rules via the invocation of the all-powerful Section 44 of the interim constitution.