Explainer: New rules for the House of Representatives
Thailand
Politics

Explainer: New rules for the House of Representatives

It could hold the key to the balance of power in Thailand: the new constitution has changed the way members of the House of Representatives are elected. What exactly are those changes, and how might they affect the kingdom's immediate future?

The Thai parliament has two chambers – the House of Representatives, and the Senate. In this explainer, we’ll explore the newly-redesigned House. (Scroll down for text)

The House of Representatives has 500 members. Under the new 2017 constitution, the number of constituency MPs elected under a first-past-the-post system has decreased from 375 to 350, while the number of party list MPs chosen according to proportional representation has risen from 125 to 150. 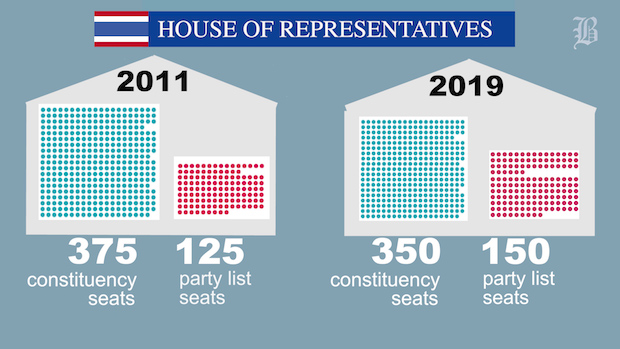 The type of proportional representation has also changed. In the 2011 election, each voter cast two ballots – one for a candidate from their constituency, and the other for one of the parties.

Why? Because the number of constituencies won will be deducted from that party’s allocation of party list seats.

Will it make much of a difference? It will hurt the bigger parties and help the smaller parties.

We can take Thailand’s biggest party, Pheu Thai, as an example.

If the same proportion of people voted for Pheu Thai candidates in the next election, they would get far fewer party list seats. That’s because this time around, the total number of constituencies won will be deducted from the total allocation of party list seats. 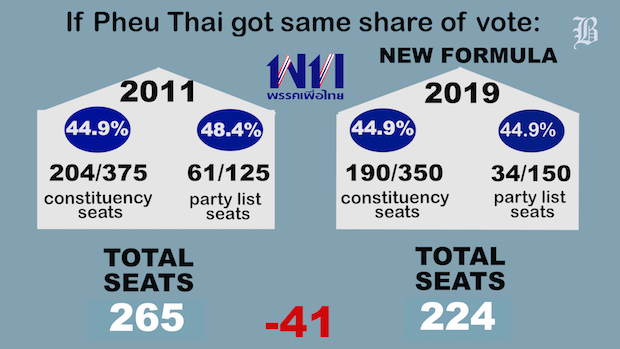 If the proportion of Pheu Thai constituency MPs remained the same, they’d have 190 seats – fewer than the 204 they got in 2011, but only because the total number of constituencies in the House has fallen from 375 to 350.

But under the new system, they’d only get 34. Why? Because the constituencies won count against the overall total. 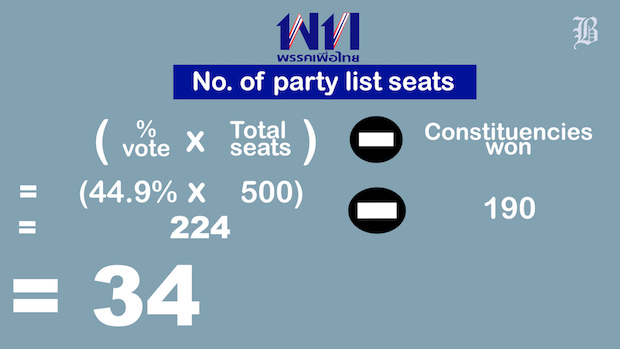 Pheu Thai would lose 41 seats under the new system, dropping from 265 in the last election to 224 in this one – even if it got the same share of the vote.

Some people say under the new constitution, Pheu Thai’s number of seats will exactly match its share of the vote – that’s only fair, they say, and it’s true democracy. Now all the parties above a minimum threshold get representation in the House, whether or not they won any constituencies.

Others argue the greater representation of smaller parties will lead to parliamentary gridlock, and the system has specifically been designed to reduce the power of Pheu Thai.

In fact, they say, by eliminating the ballot for a party and abolishing the nationwide single number for each party’s candidate, they’ve reduced the power of large political parties…and increased the chances the non-elected Senate or the military will have to step in to restore order to a House hopelessly divided between numerous bickering parties.

Push to clean up pavements

High-value industrial products with few imported raw materials are expected to be the hardest hit as baht strengthens.